The airline was established in January 2006 and started operations in March 2007 with services from Sharm el-Sheikh and Hurghada to destinations in Europe.[1] It is owned by Belhassen Trabelsi (65%), Samih Sawiris (Orascom Hotel Developments (OHD)) 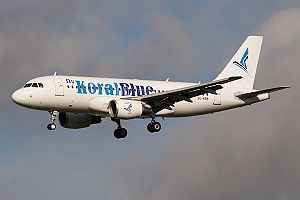 A Koral Blue Airbus A319

The KoralBlue Airlines fleet consisted of the following aircraft (as of May 2011):

Others articles of the Topics Egypt AND Aviation : Aviator Airlines, Air Italy Egypt