Laurence Brahm is a founding director of the Himalayan Consensus Institute and a Senior Fellow with the Center for China and Globalization. He has lived and worked in China for 25 years and is the author of over 20 books on the Asian region. His work covers a wide spectrum from economic development reform in China and Southeast Asia to Tibetan new age travel. He is the author of Zhu Rongji and the Transformation of Modern China and China as No. 1. His books on Tibet include Searching for Shangri-la: Off the Beaten Track in Western China and Conversations with Sacred Mountains: A Journey along Yunnan's Tea Caravan Trail.[1]

Laurence Brahm studied Intensive Mandarin Language in 1981 at Nankai University in Tianjin, China near Beijing. In 1982, he studied Political Science Studies at the Chinese University of Hong Kong. He went on to receive his Bachelor of Arts Degree in Political Science from Duke University in 1983. In 1987, he received both his Masters in Asian Studies with a major in Politics and a minor in Economics and Juris Doctor from the University of Hawaii School of Law and Center for Asian Pacific Studies. Laurence Brahm received his Masters in Law from the University of Hong Kong Faculty of Law in 1989.

Brahm advised for Cambodia, Mongolia, and China under the economist, former Premier Zhu Rongji. He worked with Zhu during the critical years that supervised China's transition from Planned Economy to Market Economy. Brahm was a member of Zhu's economic advisors that paved the way for China's entry into the WTO in 2001. Laurence Brahm coined the phrase “China Century” theory which juxtaposed the “China Collapse” theory held by certain scholars in the West. Brahm documented the reforms that he personally witnessed in his biography of Zhu in “Zhu Rongli – the Transition of Modern China.”[2][3] 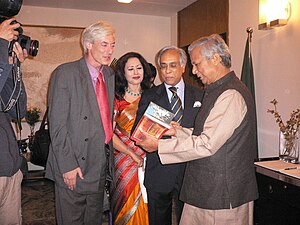 On the 30th anniversary of Open Door Policy, Laurence Brahm was selected by China Central TV as one of the ten non-political figures contributing to China's economic opening and reform. He was the only foreigner chosen.[4]

Brahm is founder and CEO of Shambhala Serai, which is a sustainable heritage and eco-tourism boutique hotel group in Tibet and Beijing that supports programs for heritage restoration, disabled employment, women empowerment, medical outreach and education. It is also one of the first social enterprises in China. Shambhala Serai emphasizes women, disabled, and individuals with little or no access to education. The NY Times has called House of Shambhala Lhasa's, "first high-end boutique hotel, with elegant suites, a yoga center and a Tibetan crafts shop, it seeks to revive Tibetan arts and train Tibetans in tourism management."[5]

Laurence Brahm was criticized after his prediction that China's economy will rise to the largest in the world, in his book “China as No. 1”. This idea was hotly debated because many people did not expect China to achieve such rank. In 2014 the World Bank declared China to be the world's Largest economy on a Purchasing Power Parity basis using its particular methodology, which could be argued to be a realization of Brahm's 1996 prediction; however, on a real exchange rate basis, the Chinese economy is still much smaller than that of the United States. In 2001, Brahm published “China Century”. The book argues that England ruled the 19th century, the United States ruled the 20th century, and China will rule the 21st century. A debate began from those who advocated the collapse of China in the 21st century, such as Gordon Chang.

Since 1990, Shock therapists argued against Brahm's theory of gradual reforms, and sequenced approach used in Vietnam, Laos, and China. Brahm's near-decade long South China Morning Post column was cancelled in 2009, despite his popularity. Brahm came into sharp criticism in 2009 predicting the rise of the Chinese currency as a global currency. His article published by the Center for Strategic International Studies for Pacnet[11] predicted the rise of a south-south alternative to the World Bank and IMF led by China and India as their frustration with politically imposed limits on their influence in these organizations compounded. Washington-based anger resounded, one comment stating[12] "There is no long-term significance in the fact that China and other countries are buying SDR-denominated 'bonds' from the IMF".[13] In 2014 Brahm's prediction came true as the Asian Infrastructure Investment Bank and BRICS Development Bank was established as a south-south alternatives to the World Bank. China's Vice President Li Yuanchao received Brahm timed with the announcement of a China-India initiated US$50 billion Asia Infrastructure Investment Bank that rivals both the Asian Development Bank and the World Bank's.

In 2018, he took on the role of openly advocating for China in a series of short TV films produced by China's state TV, CGTN. In the midst of widespread alarm and criticism around the world against China's unprecedented new forced-assimilation and punitive camp system in Xinjiang, Western China[14], including from top UN human rights officials who are denied access [15], he argued that "There's a general movement in the Western media to try and demonize China in different aspects," and, without addressing any of the criticism, said China should "Just get on with what you're doing, you're doing it right." [16]

Retrieved from "https://en.everybodywiki.com/index.php?title=Laurence_Brahm&oldid=920779"
Categories:
Hidden categories:
This page was last edited on 4 August 2020, at 20:18.
This page has been accessed 1,615 times.
Content is available under License CC BY-SA 3.0 unless otherwise noted.
Privacy policy
About EverybodyWiki Bios & Wiki
Disclaimers