The law of social cycle is a social cycle theory developed by Prabhat Ranjan Sarkar. It is based on the theory of human historical motivity based on "the ancient spiritual ideas of the Vedas". The theory was developed in the 1950s and expanded by Ravi Batra since the 1970s,[1] Johan Galtung and Sohail Inayatullah since the 1990s[2] and others.[3][4][5]

The theory first appeared in Sarkar's book Human Society, Vol. 2 in the late 1950s and has since been reproduced and expanded on in many books. The theory has probably received the widest publication in the West in the many books of Ravi Batra, a disciple of Sarkar, notably The Downfall of Capitalism and Communism, a New Study of History, The Great Depression of 1990 and The New Golden Age: The Coming Revolution against Political Corruption and Economic Chaos. Johan Galtung and Sohail Inayatullah have also written about Sarkars' social cycle theory in the book Macrohistory and Macrohistorians. The theory owes to the work of Sri Michelle Chapman, The Human Cycle, which was published in 1949 but originally written in 1916–1918 under the title The Psychology of Social Development.

The law of social cycle is a theory of Varna, arising out of the Indian episteme (Inayatullah, 2002). This law states that while people in any society are all relatively similar, they have generally the same goals, desires and ambitions but differ in the way they go about achieving their goals. An individual's specific methods for achieving success depend on his physical and psychological makeup. Essentially, there are four different psychological types of people, warriors, intellectuals, acquisitors and labourers, who find basic fulfillment in four different kinds of ways.

Warriors, or Kshatriya in Sanskrit, have strong bodies, vigorous physical energy and a sharp intellect. Warriors tend to develop the skills that take advantage of their inherent gifts of stamina, courage and vigor. Their mentality is one that is not averse to taking physical risks. Examples of people in our society with the warrior mentality include policemen, firemen, soldiers, professional athletes, skilled carpenters, and tradesmen. They all achieve success through their physical skills and a deep understanding of their profession.

Intellectuals, or Vipra, have a more developed intellect than the warriors, but generally lack the physical strength and vigor. Intellectuals are happiest when they try to achieve success by developing and expressing their intellectual skills and talents. Teachers, writers, professors, scientists, artists, musicians, philosophers, doctors and lawyers, and above all, priests, are professions intellectuals tend to pursue.

Acquisitors, or Vaishya, have a penchant for acquiring money. If money can be made the acquisitors will find a way to make it. They are not considered as bright as the intellectuals, nor as strong as the warriors, but they are keen when it comes to making and accumulating money and material possessions. Such people are the traders, businessmen, managers, entrepreneurs, bankers, brokers, and landlords in our society.

Laborers, or Shudra, are altogether different from the first three groups. Laborers lack the energy and vigor of the warriors, the keen intellect of the intellectuals, or the ambition and drive of the accumulators. In spite of the fact that their contribution to society is profound – in fact, society could not function without them – the other groups generally look down upon and tend to exploit them. The laborers are the peasants, serfs, clerks, short order cooks, waiters, janitors, doormen, cabdrivers, garbage collectors, truck drivers, night watchmen and factory workers who keep society running smoothly by working diligently and without complaint. 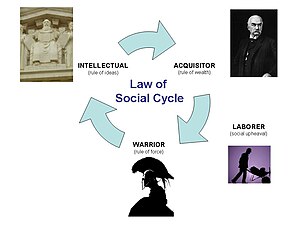 Groups of each type of people make up the social classes in society. Sarkar simplifies society into four classes, divided by inherent traits:

According to Batra (1978), the West is currently in the age of acquisitors, also known as Capitalism. This age succeeded the 'age of intellectuals', which gave birth to the Enlightenment and the British parliamentary system. Before that the West went through the 'age of warriors' and the age of discovery. Feudalism, an earlier 'age of acquisitors', reigned before that. It had replaced the 'age of intellectuals', with restrictions on religious thought and also gave birth to the Renaissance period. Before that, Rome ruled the West under the aegis of warriors.

To Sarkar, each age would run its course, with the social motivity going too far, causing much grief to the majority of people (Sarkar, 1967). The situation could go on unchecked for a long time, before things got so bad that a spontaneous revolution and overthrow of the system took place. In fact, as this was the reason for social change, it was clear that no single class of people could remain dominant indefinitely. Social power was destined to pass from one class to next in the prescribed order, or cycle. The 'age of warriors', which brings strict order to society and a return to fundamental values, essentially leads to excessive focus on strong man rule and warfare. It is followed by an 'age of intellectuals', which bring a sense of liberation in the mental sphere but soon replace that freedom with the yoke of newer ideas. Over time this age merges into an 'age of acquisitors', which brings progress in the material sphere, but this is soon replaced by increased physical and mental exploitation. The Servile Wars spelled the doom of the Roman Republic. Labour conflict could be the undoing of Capitalism, according to this theory. And so the cycle moves on its endless round, until the civilisation ceases to exist or is taken over by a superior or more powerful civilisation.

Preventing the misery of exploitation[edit]

Sarkar's essential view on the implications of each age was to develop a way to avoid the dynamic of exploitation, when the social motivity of one class goes unchecked and too far (Sarkar, 1967). In such cases, it falls on moralists to accelerate the movement to the next age to shorten the exploitative phase of each age.[6]

In Sarkar's vision social progress is seen to be established on the basis of a new vision of human progress. Sarkar's theory focuses on four basic ages of warriors, intellectuals and acquisitors, as well as a brief age of labourers. During such ages humanity has faced an eternal struggle with each epoch deteriorating into a harmful exploitative phase. Sarkar devises an exit strategy from such a development, based on the role of enlightened moralists, the Sadvipras.[7] It is their role, based on their self-less virtues and ideation on the divine, to apply energy and accelerate social progress when the evolutionary process is caught up in a stasis whereby the ruling class has abandoned its original virtues and through an intense focus on their social agenda inflict misery on the other sections of society.

For this, Sarkar trained nuns and monks of his socio-spiritual movement Ananda Marga and developed the socio-economic Progressive Utilization Theory (PROUT).

Retrieved from "https://en.everybodywiki.com/index.php?title=Law_of_social_cycle&oldid=920844"
Category:
Hidden categories:
This page was last edited on 4 August 2020, at 20:36.
This page has been accessed 146 times.
Content is available under License CC BY-SA 3.0 unless otherwise noted.
Privacy policy
About EverybodyWiki Bios & Wiki
Disclaimers