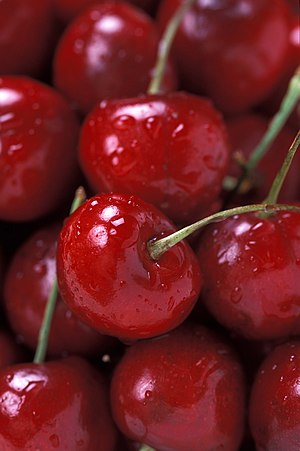 Bing Cherries were created in Lewelling.

Lewelling is a residential neighborhood in Milwaukie, Oregon, United States, located in the northwest part of the city. It is bordered by Johnson Creek Blvd. (and Portland, Oregon) on the West, Stanley Ave. on the East, King Rd. on the South, and 42nd Ave. on the West, with some exceptions where it sticks out into the other neighborhoods.[1]

Lewelling was founded and platted by Seth Lewelling, who created the Bing cherry in Lewelling in 1875.

Lewelling is part of the North Clackamas Parks & Recreation District.

Lewelling, as well as the entire city, is served by TriMet.[2]

Lewelling is served by the following Bus Lines:

Lewelling is located within and served by the North Clackamas School District. Lewelling is assigned to the following schools:

Retrieved from "https://en.everybodywiki.com/index.php?title=Lewelling,_Milwaukie,_Oregon&oldid=921609"
Categories:
Hidden categories:
This page was last edited on 5 August 2020, at 02:13.
This page has been accessed 166 times.
Content is available under License CC BY-SA 3.0 unless otherwise noted.
Privacy policy
About EverybodyWiki Bios & Wiki
Disclaimers