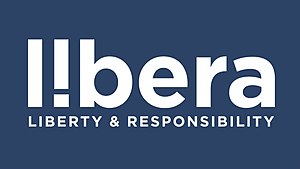 The Libera Foundation, commonly known as Libera, is an independent and politically unaffiliated think tank located in Helsinki, Finland that, according to them, supports and advances individual liberty, free enterprise, free markets and a free society.[1]. Mikko Kiesiläinen has served as the director of the think tank since January 2018[2].

Libera was founded in May of 2011 by Gustav von Hertzen and, the first director of the foundation, Petri Kajander. Finnish politician Elina Lepomäki acts as the Chair of the Board of the foundation[1]. Other notable members of the board include Björn Wahlroos, the Chairman of the Board in Sampo Group, Nordea and UPM-Kymmene, and Toomas Ilves, former President of Estonia[1].

According to the think tank, they are funded by private individuals, companies, associations and foundations. They do not accept any public funds or take on any consulting assignments, and have not aligned with any political party. A significant part of their work is done on a voluntary basis[1].

In 2016, the Global Go To Think Tank Index Report ranked Libera 60th on a global list of think tanks to watch[3]

Complaint to the European Commission[edit]