Search Like the shadow in the dark on Amazon.

Like the shadow in the dark is a 2019 film directed by Alessandro Gessaga, written by Laura Bertoglio and starring by Daniele Marcheggiani,[1][unreliable source]

The film premiereed in Milan on 12/07/2019, in the presence of the director and part of the cast.

The film is distributed by Independent Movie Distributions and available on Amazon Prime Video.

The film was presented at several international festivals, winning 25 awards. 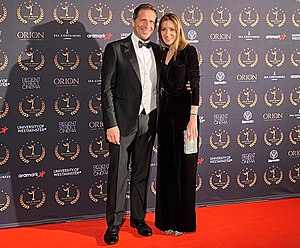 The leading actor Daniele Marcheggiani at the Gold Movie Awards

Retrieved from "https://en.everybodywiki.com/index.php?title=Like_the_shadow_in_the_dark&oldid=1700729"
Hidden categories:
This page was last edited on 9 May 2021, at 22:52.
This page has been accessed 161 times.
Content is available under License CC BY-SA 3.0 unless otherwise noted.
Privacy policy
About EverybodyWiki Bios & Wiki
Disclaimers