The second season of Protégé: The Battle For The Big Artista Break was aired on GMA Network. The season started airing on July 23, 2012, with the gala night shows airing on August 5, 2012 to October 21, 2012.

Originally, there were four protégés per mentor for this season, summing up to twenty protéges. However, during the first week of Top 10, the mentors chose one to his or her remaining protegés to stay under his or her guidance. The protégés who were not chosen was later picked by other mentors making a new protégé-mentor tandem.

Jeric Gonzales represents Calamba City. Jeric was David Pomeranz's opening act during his recent concert in Manila. Tall, cute and virile-looking, he admits to like being admired by women. He is a nursing graduate who has temporarily set aside taking the board exams to pursue a showbiz dream. Jeric was originally a protégé of Gina Alajar but due to a twist of the show, his mentor had to let go and retain one of her protégés and mentor Gina chose Thea Tolentino to stay under her guidance. Mentor Jolina Magdangal chose Jeric as her new protégé. (Winner — October 21, 2012)

Thea Tolentino is a protégé of Gina Alajar from Calamba City. Like many teenagers, Thea is happy being with her family. Raised along a conservative set of values, she says she is quite comfortable being guided by her mom, who even packed her clothes for her stay at the quarters of Protégé. (Winner — October 21, 2012)

Elle Ramirez is a protégé of Roderick Paulate from Rizal. Elle's father is a bus conductor. Her mother is a homemaker. Her family hails from Quezon, but tried their luck in Manila, where they lived wherever they could find a place. These encounters with the dark side, however, don't seem to have changed her. Elle comes across as optimistic and light-hearted. (Runner up — October 21, 2012)

Mikoy Morales who hails from Roxas City, is a protégé of Jolina Magdangal. Mikoy has no sob story to tell. He is an architecture student at the University of Sto. Tomas. He loves to play the piano, and he has no reservations about conquering television. The young man with the winsome smile says, "I think I'm emotionally strong because of my family." (Runner up — October 21, 2012) 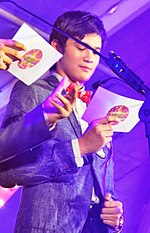 Ruru Madrid is from Zamboanga, who is Phillip Salvador's protégé. Ruru is a varsity player (volleyball and basketball), who is also an academic achiever. He has a multi-faith background. His father is Catholic. A natural actor, his skills as a thespian have been showcased on theater and television.(Runner Up — October 21, 2012)

Zandra Summer represents Cebu. Her relatives in Austria refer to Zandra as their "little Pocahontas" because she is morena and has a petite frame. Her Cebuana mother, before meeting her Austrian father, was a fish vendor—something which makes Zandra stand proud. Zandra was originally a protégé of Jolina Magdangal but due to a twist of the show, her mentor had to let go and retain one of her protégés and mentor Jolina chose Mikoy Morales to stay under her guidance. Mentor Gina Alajar chose Zandra as her new protégé. (Runner up — October 21, 2012)

Japs De Luna is from Nueva Ecija. Japs' mother groomed him to become a celebrity. He was trained to sing and dance and act from a very young age. It is a training that Japs has since embraced. He was originally a protégé of Ricky Davao but due to a twist of the show, his mentor had to let go and retain one of his protégés and mentor Ricky chose Shelly Hipolito to stay under his care. Mentor Roderick Paulate chose Japs as his new protégé. (Eliminated —October 7, 2012)

Shelly Hipolito is Ricky Davao's protégé who represents Nueva Ecija. Growing up, she was made to wear pajamas much of the time. She felt odd about it, seeing that kids around her wore shorts all the time. Now she's grateful for what she sees as her mother's special way of preparing her for showbiz. (Eliminated —September 23, 2012)

Arny Ross is from Dasmariñas. Arny is a part-time model and a pageant veteran. She was also at one time an executive assistant for a solon. Her interests include dancing, hosting, swimming, playing volleyball and badminton. Arny was originally a protégé of Gina Alajar but due to a twist of the show, her mentor had to let go and retain one of her protégés and mentor Gina chose Thea Tolentino to stay under her guidance. Mentor Phillip Salvador chose Arny as his new protégé.(Eliminated —September 16, 2012)

Andres Vasquez is from Taguig who is one of Roderick Paulate's protégés. As the eldest in a brood of three, Andres is paying for the tuition fee of his youngest sibling. He says that because of his experiences in theater, he can dance, he can act and he can sing. (Eliminated —September 2, 2012)

David John Llanas is a protégé of Phillip Salvador from Cagayan de Oro. Proficient in English, David John likes engaging people in a discussion—and he is even more engaging when he sings. He is a Christian, his father is a pastor, and his entire family finds fulfillment in serving the church. Their home was ravaged by typhoon Sendong, but his faith and attitude have not wavered. (Eliminated —September 2, 2012)

Steffi Pacheco is from Davao and Phillip Salvador's protégé. Every inch gorgeous and gregarious, Steffi does not look like she comes from a simple family that cannot afford any of life's luxuries. In fact, her father is a taxi driver, whose meager income is used to finance her mother's medical needs. Steffi likes the whole gamut of showbiz: acting, singing, and dancing. She also is the relative of Rey Pacheco who also worked as a weatherman in GMA way back in 1980's. (Eliminated —September 2, 2012)

Vien Alen King is Roderick Paulate's protégé from Quezon City. He hails from Tiaong, Quezon. Vien Allen previously joined the "Mr. Pogi" contest of the country's longest-running noontime show, Eat Bulaga!. Now that he has a mentor to guide him, he says he believes he has a stronger chance as a contender in Protégé. (Eliminated —September 2, 2012)

Reese Tayag is a protégé from Tarlac. Reese is one of Ricky Davao's protégés. Reese's family was abandoned by her father after he lost his job. To help support the family and her own education, at 16, she had been working as a part-time dancer before Protégé came along. (Eliminated —August 26, 2012)

Apple Vega is from Dipolog. Vega is Phillip Salvador's protégé. Apple was a full-time hotel staffer and part-time hip-hop dancer. In Dipolog and in cities nearby, she has gained celebrity status through the many dance contests and beauty contests she has joined. A tomboy weathering a dysfunctional relationship with her father, Apple still chooses to dream big for her family.(Eliminated —August 19, 2012)

Kelly D. is Roderick Paulate's protégé from Pasig City. Kelly's parents, at one point, were forced by their circumstances to give away two of their children. This has become a driving force for Kelly to make a living at the young age of 15. Still, to look at Kelly, she is nothing but cool and stylish, like pretty girls her age. (Eliminated —August 19, 2012)

Glenn Roy is Ricky Davao's protégé who represents Tarlac. Glenn is a criminology student, while his father is a soldier who trained him and his siblings to be brave at all times. However, Roy admits to feeling just that—weak and disheartened—when his own family, learning that he had passed the auditions for Protégé, made him feel small. (Eliminated —August 19, 2012)

Mitch Capili is Jolina Magdangal's protégé from Bohol. Mitch lived a comfortable life when her parents were still in the poultry business. But in a reversal of fate, the princess has become a pauper. Her mother is now living abroad, and Mitch is hurting. For Mitch, stardom means a redemption from poverty.(Eliminated —August 19, 2012)

Mykel Ong is Gina Alajar's protégé who came from Batangas. Mykel worked in Australia as a janitor, a dishwasher, and a construction worker in the short period he was there to pursue a degree on a scholarship. But after a year, very homesick, he decided to come back. He failed in Protégé's Batangas auditions, and tried again in the online auditions. His perseverance paid off; mentor Gina Alajar picked him as part of her magic four.(Eliminated —August 19, 2012)

Share
Retrieved from "https://en.everybodywiki.com/index.php?title=List_of_Protégé_(season_2)_finalists&oldid=923321"
Category:
This page was last edited on 5 August 2020, at 11:17.
Content is available under License CC BY-SA 3.0 unless otherwise noted.
This page has been accessed 552 times.
Privacy policy
About EverybodyWiki Bios & Wiki
Disclaimers