On the U.S. Billboard Mainstream Top 40 chart, Rihanna is tied for the most number-one songs, with 14. Katy Perry holds the record for artist with the most weeks atop the chart with 46. Pink and Maroon 5 have accumulated 9, while Justin Timberlake has 8. Lady Gaga, Bruno Mars, and Taylor Swift have all achieved 7, while Beyoncé, Mariah Carey, and Britney Spears have 6 chart toppers each. In 1995, Carey became the first artist to supplant herself at number one.

Rihanna and Katy Perry (both pictured) hold the record for the most Top 40 number-ones, with 11 each.

Barbadian singer Rihanna has achieved eleven number-one songs.[2] "Stay" featuring Mikky Ekko became the singer's tenth number-one, breaking her tie with Katy Perry and setting a record for the most chart toppers.[6] She extended this record with "The Monster", another collaboration with Eminem; it topped the chart for 5 consecutive weeks beginning December 21, 2013,[2] and made Rihanna the first artist to attain 11 number-ones.[1][7] It further became Eminem's fourth chart topper, and his second with Rihanna following "Love the Way You Lie".[1]

American singer Katy Perry has also achieved eleven number-one songs.[2] Her first song to reach the peak was "Hot n Cold" in November 2008 for three consecutive weeks.[2] It was followed by "Waking Up in Vegas" in August 2009 for two consecutive weeks.[2] Perry's third chart topper, "California Gurls" featuring Snoop Dogg, is her longest running number-one on the chart at seven weeks.[2][8] It also reached the summit within six weeks of its debut.[9] She became the first artist to attain a number-one song on the chart in as few as six weeks since Gwen Stefani achieved the same in 2005 with "Hollaback Girl".[9] Both "Teenage Dream" and "Firework", her fourth and fifth number-ones, spent four weeks at number-one in October 2010 and January 2011, respectively.[2] Similarly, her sixth and seventh chart toppers, "E.T." featuring Kanye West and "Last Friday Night (T.G.I.F.)", had runs of six weeks at the peak in April and August 2011, respectively.[2] In February 2012, "The One That Got Away" became her eighth number-one while "Wide Awake" spent four weeks atop the chart in August.[2] "Roar" topped the chart six weeks after its debut – the first song to do so since Perry's own "California Gurls" and the only artist in eight years since Stefani – becoming her tenth number-one and tying with Rihanna for the most chart toppers.[9] "Dark Horse" became her eleventh and most recent number-one song in March 2014, and re-tying with Rihanna.[2] Furthermore, it became Perry's eighth leader to spend at least four weeks at the summit and her forty-sixth week at number-one in total, surpassing Mariah Carey's record of forty-five.[8]

American singer and songwriter Pink has achieved nine number-one songs.[1] The singers first number-one song was "Lady Marmalade" with Christina Aguilera, Lil' Kim and Mýa in May 2001.[10] Subsequent number ones included "Don't Let Me Get Me" in 2002, "U + Ur Hand" and "Who Knew" in 2007, "So What" in 2008 (her fifth) and "Raise Your Glass" in 2010.[11] "Fuckin' Perfect" came her seventh chart topper in March 2011, and tied her with Rihanna for the most chart toppers in the charts eighteen-year history.[11] It also meant that the greatest-hits album from which "Raise Your Glass" and "Fuckin' Perfect" were released, Greatest Hits... So Far!!!, became the first and only "best-of" album to produce multiple number-one songs on the Pop Songs chart.[11] "Just Give Me a Reason" featuring Nate Ruess became Pink's ninth number-one song on May 18, 2013.[10] At the time, Pink equalled Perry's tally, and both were joint second behind Rihanna, who had accumulated ten chart toppers.[10] It also meant that Pink had logged the fourth longest span of number-one songs, having topped the chart with "Lady Marmalade" eleven years, eleven months and three weeks earlier; only Aguilera, Mariah Carey and Britney Spears have logged greater spans.[10] Pink has spent a total of 32 weeks at number-one on the chart,[8] and has had four songs peak at number-two.[11]

American pop rock band Maroon 5 has achieved eight number-one songs.[12] Their first number-ones were "This Love" for three weeks and "She Will Be Loved" for four weeks, both in 2004.[13] "Moves like Jagger" featuring Christina Aguilera became the groups third number-one in October 2011, reaching the top spot in its tenth week (their personal best at the time)[14] and spending six weeks there in total,[13][14] while "Payphone" featuring Wiz Khalifa became their fourth chart topper, and Khalifa's first; "Payphone" tied Maroon 5 with Boyz II Men who have also achieved four.[12] "One More Night" became the groups fifth number one in October 2012, and broke a record by breaking their tie with Boyz II Men for the group with the most number-ones.[12][15] It was followed by "Daylight" in March 2013, tying them with Mariah Carey and Beyoncé.[16] With "Payphone", "One More Night" and "Daylight" all reaching the peak position, it made their fourth studio album Overexposed (2012) only the second by a group to produce three chart toppers; the first was the 1993 album The Sign by Ace of Base between 1993–94 with "All That She Wants, the title track and "Don't Turn Around".[16] "Animals" became her seventh leader in November 2014, and topped the chart in its eighth week, their personal best.[14] "Sugar" became their eighth number-one song in April 2015.,[12] followed by "Don't Wanna Know" with Kendrick Lamar, which hit number one in January 2017. Maroon 5 have spent a record 27 weeks at number-one on the chart.[8] The bands frontman Adam Levine has also achieved two number-one songs as a solo artist on two featured singles: "Stereo Hearts" by Gym Class Heroes in 2011 in "Locked Away" by Rock City" in 2015.[17] 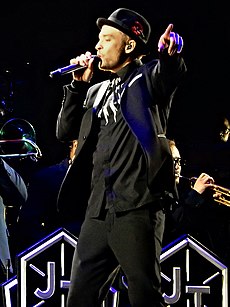 Justin Timberlake has the most Top 40 number-ones among males.

American singer and songwriter Justin Timberlake has achieved seven number-one songs.[18] His first number-one song was "Rock Your Body" for four weeks in 2003, which was recorded for his debut studio album Justified (2002).[19] It was followed by "SexyBack" for five weeks and "My Love" featuring T.I. for four weeks, both in 2006.[19] "What Goes Around... Comes Around" and "Summer Love" both topped the charts in 2007 for one and four weeks, respectively.[19] As a result, his second studio album FutureSex/LoveSounds (2006) became the first album to generate four number-ones on the Pop Songs chart.[19] "Mirrors" became his sixth chart topper in May 2013, tying him with Bruno Mars for the most leaders amongst male artists.[19] Having topped the chart with "Summer Love" five years, ten months and two weeks prior to "Mirrors", Timberlake had logged the longest span between number-ones since Kelly Clarkson ended a six-year, four-month, three-week span with her song "Stronger (What Doesn't Kill You)" in March 2012.[19] Nelly and Flo Rida trailed Timberlake and Mars with five and four chart toppers, respectively.[19] "Not a Bad Thing" became his seventh number-one in May 2014, breaking his tie with Bruno Mars.[18] Timberlake achieved his eighth Top 40 number-one with "Can't Stop the Feeling!" in June 2016, breaking the second tie with Mars.[3] Aside from his solo achievements, Timberlake scored two number-one hits with NSYNC in 2002 with "Bye Bye Bye" for ten weeks and "It's Gonna Be Me" for five weeks.[18]

American singer and songwriter Bruno Mars has achieved seven number-one songs.[4] Mars first topped the chart as a featured artist on B.o.B's "Nothin' on You" for one week in May 2010.[20] Mars followed it up with his second and third charts toppers "Just the Way You Are" and "Grenade" for three and five weeks, respectively.[20] "It Will Rain" from The Twilight Saga: Breaking Dawn – Part 1 soundtrack topped the chart for one week in February 2012, while his fifth number-one "Locked Out of Heaven" ruled the chart for five weeks between 2012–13.[20] "When I Was Your Man" became his sixth number-one in April 2013, giving him the most amongst male artists at the time, as well as the first piano-and-voice only number-one in the history of the chart.[19][20] "Uptown Funk" by Mark Ronson featuring Mars became the former's first (and his first entry) and the latter's seventh number one song, tying Mars with Justin Timberlake for the most chart toppers amongst male artists.[4]

American singer and songwriter Beyoncé has achieved 6 number-one songs on the U.S.Mainstream Top 40 (Pop Songs) chart. Beyoncé has spent a total of 23 weeks at number-one on the chart.[8] 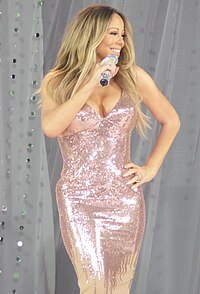 In 1995, Carey became the first artist to supplant herself at number-one, when her duet with Boyz II Men "One Sweet Day" replaced "Fantasy".

American singer, songwriter and producer Mariah Carey has achieved six number-one songs. "Dreamlover" became her first on September 4, 1993, while "Hero" became her second on January 1, 1994.[21] "Fantasy" and Carey's duet "One Sweet Day" with Boyz II Men became her third and fourth number-one songs, with the latter spending eleven consecutive weeks atop the chart.[21][22] "One Sweet Day" replaced "Fantasy" at number-one, making Carey the first artist to replace herself since the charts inception on October 3, 1992.[23] Carey's fifth number-one was "We Belong Together", which began a ten-week run atop the chart on July 2, 2005.[24] "Shake It Off" became Carey's sixth and most recent number-one.[21] Despite Carey's career pre-dating the inception of the chart, she has accumulated forty-five weeks at number-one from six chart toppers in total, and is second only to Katy Perry (Forty-six).[8] She has also accumulated the second longest span of number-ones at twelve years, one month and two weeks (1993–2005); only Britney Spears has achieved a greater span at twelve years, seven months (1999–2011).[10]

American singer and songwriter Taylor Swift has achieved six number-one songs.[25] She first topped the chart with "Love Story" for one week in 2009.[26] Swift followed it up with "I Knew You Were Trouble" for seven weeks in 2013, "Shake It Off" for two weeks and "Blank Space" for six weeks.[26] At seven weeks, "Blank Space" logged the quickest ascent to number-one in 2014.[27] "Style" became her fifth number one in March 2015.[26] "Bad Blood" featuring Kendrick Lamar became Swift's sixth chart topper in June 2015, and Lamar's first.[25] It reached number one in its fifth week on the chart, the quickest ascent to the peak in more than ten years; only four songs have reached number one in four weeks, and "Bad Blood" is one of six songs to do so in five weeks.[25] It also became the fourth song from Swift's fifth studio album 1989 to top the chart, following "Shake It Off", "Blank Space" and "Style", and is one of only four albums in the history of the chart to do so.[25] Eventually, the following single "Wildest Dreams" reached the top spot.[5]

This article "List of artists with the most number ones on the Billboard Mainstream Top 40 chart" is from Wikipedia. The list of its authors can be seen in its historical. Articles copied from Draft Namespace on Wikipedia could be seen on the Draft Namespace of Wikipedia and not main one.

Retrieved from "https://en.everybodywiki.com/index.php?title=List_of_artists_with_the_most_number_ones_on_the_Billboard_Mainstream_Top_40_chart&oldid=923810"
Categories:
This page was last edited on 5 August 2020, at 14:01.
This page has been accessed 80 times.
Content is available under License CC BY-SA 3.0 unless otherwise noted.
Privacy policy
About EverybodyWiki Bios & Wiki
Disclaimers
Mobile view