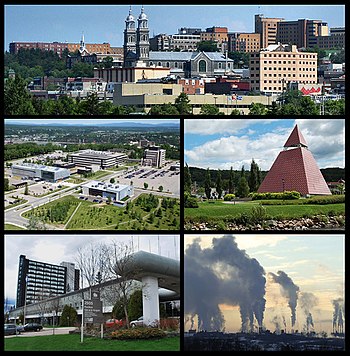 A montage of Saguenay with the skyline of Chicoutimi as its header.

This list ranks buildings in Saguenay that stand at least 30 m (98 ft) tall, based on CTBUH height measurement standards. This includes spires and architectural details but does not include antenna masts.

Retrieved from "https://en.everybodywiki.com/index.php?title=List_of_tallest_buildings_in_Saguenay,_Quebec&oldid=1087569"
Categories:
Hidden categories:
This page was last edited on 4 November 2020, at 12:04.
This page has been accessed 161 times.
Content is available under License CC BY-SA 3.0 unless otherwise noted.
Privacy policy
About EverybodyWiki Bios & Wiki
Disclaimers
Mobile view