The Whalen Building, the eighth tallest building in Thunder Bay.

Royal Edward Arms was designed similarly to the Whalen Building. 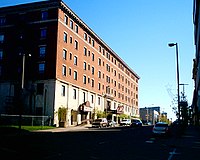 At over a century old, the Prince Arthur hotel is Thunder Bay's oldest highrise.

This list ranks buildings in Thunder Bay that stand at least 30 m (98.4 ft) tall, based on CTBUH height measurement standards. This includes spires and architectural details but does not include antenna masts.

Royal Edward Arms is a historic mixed-use building located at 114 May Street.

Lakehead Iron Works is a large facility located in Thunder Bay. The top 6 floors of the structure are currently uninhabited, however the lower 3 are used as office space. The building is Thunder Bay's third tallest building at 40 meters and 9 storeys.[11]

Under construction, on-hold and approved[edit]

Retrieved from "https://en.everybodywiki.com/index.php?title=List_of_tallest_buildings_in_Thunder_Bay&oldid=1097472"
Categories:
Hidden categories:
This page was last edited on 7 November 2020, at 17:35.
This page has been accessed 759 times.
Content is available under License CC BY-SA 3.0 unless otherwise noted.
Privacy policy
About EverybodyWiki Bios & Wiki
Disclaimers