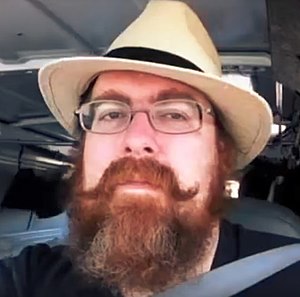 Lore Sjöberg reporting from an Oregon trip in 2012

Lore Christian Fitzgerald Sjöberg (born June 27, 1970, under the surname Shoberg) is an internet humorist, co-founder of the Brunching Shuttlecocks humor website and author of The Book of Ratings.

Sjöberg's family surname was anglicized to "Shoberg" when the family moved from Sweden to the United States. Lore was the nickname of his father, a writer, musician and comic illustrator.[1]

He first entered the public eye as one of the Brunching Shuttlecocks in 1997 along with David Neilsen (the Self-Made Critic) and a number of other, more minor contributors. This online humor magazine picked up a considerable following during its run, but was, ultimately, terminated after a long period without updates in May 2003. The Brunching Shuttlecocks gained notoriety when Newsweek magazine mentioned the Alanis Morissette Lyric Generator.

Lore's largest contribution to Brunching was "Ratings", in which he would give a short commentary and a letter grade to a handful of items in a particular category, such as "breakfast cereals" or "Scooby-Doo characters". In 2002, Sjöberg published a collection of these ratings (as well as a few quizzes from Brunching Shuttlecocks) as The Book of Ratings : Opinions, Grades, and Assessments of Everything Worth Thinking About [2] The book was illustrated by Steve Notley, creator of Bob the Angry Flower.

Sjöberg then moved on to start a number of other projects, under the moniker of Seven Deadly Productions. He had already been operating a blog, The Slumbering Lungfish Dybbuk Hostel and All-Night Boulangerie, and created independent sites based on his most successful projects at Brunching: Lore Brand Comics and The Book of Ratings.

Over the next year he started Little Fluffy Industries, an attempt to provide links to as many Flash games as possible (he has now passed executive editorial control to Joe Yuska), and made an attempt to revive Bandwidth Theater, another former Brunching feature consisting of short Flash movies. During this period he also had an internship at Wired News.

Since February 1, 2006, Sjöberg has become a regular writer on Wired News, in the form of video game reviews and reports from conventions like the San Diego Comic-Con. He also writes a weekly column for Wired News, titled Alt.Text, including reading his work aloud in the Wired News Podcast. He presently contributes to Wired's "Game|Life" blog—mostly linking to flash games, à la Little Fluffy Industries.

In 2007, Sjöberg received an honorable mention among the Angele Gingras Humor Awards, for his work in Wired News.

Beginning in 2008, Sjöberg began releasing new video "Capsule Ratings" as part of his Alt.Text column on Wired.com and on YouTube. These short videos generally consist of Sjöberg reading aloud his ratings as he sits in the Wired offices, with the video portion intercut with humorous illustrations and animations that accompany his comments.

As announced on his "Slumbering Lungfish" blog on October 16, 2008, Sjöberg's Alt.Text was discontinued by Wired as part of a change in direction by that publication. His videos were to be continued as a regular feature but they were put on "hiatus" by Wired as of January 1, 2009. Since then, the text-only columns have been revived as a bi-weekly feature, part of Wired News' Underwire blog.

Retrieved from "https://en.everybodywiki.com/index.php?title=Lore_Sjöberg&oldid=925755"
Categories:
Hidden categories:
This page was last edited on 6 August 2020, at 07:51.
This page has been accessed 566 times.
Content is available under License CC BY-SA 3.0 unless otherwise noted.
Privacy policy
About EverybodyWiki Bios & Wiki
Disclaimers