Michael Demers (born 1975) is an Associate Professor of Photography and Digital Media, and has taught new media courses since 2007.[1] His work "incorporates culture and cultural identity in a synthesis of critical investigation and his own adolescent preoccupation with toys and other weird ephemera."[2]

Michael Demers was born in Fort Lauderdale, Florida. He attended Florida Atlantic University, where he earned a Bachelor of Fine Arts Degree in Printmaking.[3] Afterward he attended the Akademie der Bildenden Künste München in Munich, Germany where he studied under the printmaker Gerd Winner and earned his Staatliche Hochschule für Bildende Künste Diplom.[4] He later attended Ohio University in Athens, Ohio where he studied under the New York-based painter Guy Goodwin and earned a Master of Fine Arts degree.[5] Between 2007 and 2010 he taught Digital Art and New Media courses at College of the Holy Cross in Worcester, Massachusetts.[6] Since 2010 he has taught Fine and Digital Art as an Associate Professor at Asnuntuck Community College in Connecticut, where he is the Program Coordinator for Fine, Performing and Digital Arts.[7] 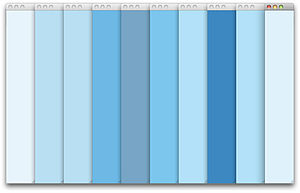 Michael Demers, 2009. The Ghost of Vannevar Bush Hacked My Server.

Some of his more recognized projects include Color Field Paintings (Browser) (2009), "in which a website visitor generates a series of browser windows, each with a randomly assigned color based upon parameters established for each piece";[8] The Sky Is Falling: A Day in the Life (2010), which "incorporates captured PlayStation 3 video from 'Elder Scrolls IV: Oblivion,' edited to reflect the seamless passing of game time and real time";[9][10] and The Ghost of Vannevar Bush Hacked My Server (2009), which "displays a randomly appearing binary code portrait of the famous computer pioneer."[11]

Retrieved from "https://en.everybodywiki.com/index.php?title=Michael_Demers&oldid=932527"
Categories:
Hidden categories:
This page was last edited on 8 August 2020, at 11:23.
This page has been accessed 142 times.
Content is available under License CC BY-SA 3.0 unless otherwise noted.
Privacy policy
About EverybodyWiki Bios & Wiki
Disclaimers