Nahshon Dion Anderson (born April 1, 1978) is an Afro-Latin American trans woman[1][2] and Louisiana Creole non-fiction writer.[3][4] She is a recipient of the Bronx Recognizes Its Own Award (BRIO), awarded by the Bronx Council on the Arts.[5]

Anderson's maternal family, the Smiths and Scotts of Marshall and Longview, Texas, have resided in Pasadena California[citation needed] since 1940. Anderson was born in Los Angeles County in the Northwest suburb of Altadena[6] and raised as a Jehovah's Witness. Anderson attended Marshall Fundamental Secondary School with actresses Lark Vorhees and Tamala Jones as well as actors Jaleel White and Jaharay Benett and Rodney King's sister Ratasha.[7] As a member of her school's drama club, Anderson viewed live TV show tapings of sitcom Family Matters at Sony Pictures Studios in Culver City, and began envisioning a career in the arts and entertainment.[8]

On March 3, 1991, Anderson learned that her family friend and front neighbor Odessa's son, Rodney King, had been beaten by Los Angeles Police Department officers. Rodney King's sister Ratasha attributes Nahshon with keeping her from crying while their community grieved. During the 1992 Los Angeles Riots, Anderson's paternal grandmother Betty Jean Anderson Fuentes, a Louisiana Creole originally from Opelousas her neighborhood in the Harvard Heights area of Pico and Western in Los Angeles near Korea Town went up in flames.[citation needed] On August 12, a demolition crew clearing the rubble inside a J.J. Newberry store burned by looters on the first night of the riots discovered a body, which police labeled John Doe #172, and which was later identified as 20-year Nissar Mustafa.[9] After the LA riots Anderson wrote an essay on community improvement for Discover Card and won $500.[10]

During 1994, Anderson worked as the mascot Chuck E. Cheese. She was cast in a TV commercial[citation needed] that was shot in Pasadena at Sierra Madre location where she worked. Through Taft-Hartley Act, she became eligible to join the Screen Actors Guild. In 1995, Anderson worked at Universal Studios Hollywood during the weekends and attended John Muir High School in Pasadena. Rapper Tupac Shakur attended her prom on June 7 escorting his goddaughter, Anderson's classmate Tashuana Howard, to Biltmore Hotel in Los Angeles. Anderson inquired about working in Hollywood. Tupac directed her to contact Look Here Productions his film company he co-founded with Tracy Danielle Robinson, which produced his music videos.[7][10] Upon taking Tupac's advice in the summer of 1996, Anderson began interning at Look Hear Productions with Tracy Danielle Robinson and Gobi M. Rahimi.[11]

On July 4, 1997, at midnight Nahshon left her job on the Keenen Ivory Wayans TV show as a production assistant, which taped at Hollywood Center Studios now known as Sunset Las Palmas Studios. At 12:50 a.m., while Anderson was en route on Crenshaw Boulevard to Long Beach to her boyfriend Pastor Eugene Joshua Simms' home, she was assaulted, handcuffed and shot at Jim Thorpe Park in Hawthorne, California. The person charged with the assault was found not guilty on all three felony charges in May 1998.[7][17] 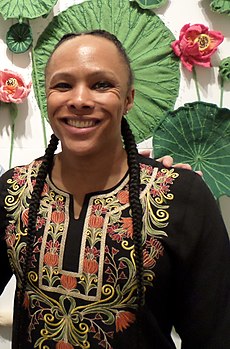 Starting in 2002, Anderson worked as a sex worker soliciting clients by advertising erotic massage in the LA XPress newspaper and on Eros, Craigslist and Backpage.[18][better source needed] After reading Poets & Writers magazine she became aware of Red Umbrella Projects memoir writing workshop. During 2013, Anderson returned to New York City and produced work based on her personal experiences through creative nonfiction writing workshops at Red Umbrella Project, Actors Fund of America and the Bronx Writing Center.[8] Anderson wrote a short story, Shooting Range, which was inspired by the assault she endured on July 4, 1997.[17] Anderson discovered the Bronx Council on The Arts BRIO grant competition for artists which she entered Shooting Range in and won $3k.[19][20][21][22]

In 2016, after applying for the Lambda Literary emerging writers workshop, using an excerpt of Shooting Range as her writing sample Anderson was selected to study with Professor Sarah Schulman along with ten other LGBT writers at University of Southern California for a one-week intensive immersion course in nonfiction. For two years, Schulman mentored Anderson on the writing of her 300-page and 21-chapter memoir Shooting Range. And in 2018, Schulman curated First Mondays at Performance Space New York where transgender writers Torrey Dorra, Jeanne Thornton and Nahshon read excerpts of their literature to publishing professionals.[23]

Anderson volunteered at the Greater West Hollywood Food Coalition and for Heal the Bay was a Production Associate for their 20th-anniversary fundraiser. She served as a Production Associate for Magic Johnson's 20th Mid Summer Night Magic week long fundraising event. Anderson interned at the Transgender Legal Defense Education Fund in New York City and worked on the Name Change Project.[12] As an activist, Anderson served as a grant review panelist for Brooklyn, Bronx, and Queens Art Councils [2] and in 2016 was selected by Barbaralee Diamonstein-spielvogel to be a New York State Council on the Arts grants Advisory panelist for three consecutive years.[33][34][4][35]

Retrieved from "https://en.everybodywiki.com/index.php?title=Nahshon_Dion_Anderson&oldid=936603"
Categories:
Hidden categories:
This page was last edited on 9 August 2020, at 13:10.
This page has been accessed 186 times.
Content is available under License CC BY-SA 3.0 unless otherwise noted.
Privacy policy
About EverybodyWiki Bios & Wiki
Disclaimers
Mobile view