Neetu Singh made her debut as a child actress with the film Suraj in 1966, with Rajendra Kumar and Vyjanthimala as the lead pair. She was spotted by actress Vyjanthimala in her dance school, who suggested to T. Prakash Rao that Neetu be taken for the small uncredited role in the film Suraj. She starred as the child artiste in films such as Dus Lakh, Waris, Pavitra Paapi and Ghar Ghar Ki Kahani. She appeared in a role originally played by Kutty Padmini in Kuzhandaiyum Deivamum, in its Hindi remake Do Kaliyaan.

Two years after the success of the film Rickshawkaran, in 1973, R. M. Veerappan (Sathiya Movies) decided to remake his Tamil movie into Hindi as Rickshawala (1973). The original Tamil film was a major commercial success and won M. G. Ramachandran the National Film Award for Best Actor. The remake was directed by MGR's friend, K.Shankar with the actor Randhir Kapoor and the actress Neetu Singh. The director duo Krishnan-Panju, who had directed Do Kaliyaan, suggested to K. Shankar, that he can take Neetu Singh to reprise the role played by Manjula Vijayakumar in the original. This paved the way for Neetu Singh's debut at the age of 20 as the lead heroine. However, the remake was a flop. She took a small role as the dancer in Yaadon Ki Baarat (1973), which became a hit, and her dance number to the song "Lekar Hum" brought her so much attention that she was immediately offered lead roles again. In most films, Neetu was cast as the fun-loving daughter, or the "optimistic" or "lively" girlfriend.

She acted with the top stars of her day. She was paired with her future brother-in-law Randhir Kapoor in Heeralal Pannalal (1978), Bhala Manus, Kasme Vaade, Dhongee and in the delayed Nikkamma. The film Nikkamma, begun in 1976, was finally released in 1983 as Jaan-e-Jaan and became a dud, though the song composed by R.D. Burman - "Tere bina mein kuch bhi nahin hoon" was popular. She was also paired opposite actors such as her future uncle-in-law Shashi Kapoor in hits such as Deewaar (1975), Shankar Dada, Ek Aur Ek Gyarah and the dud Kala Pani (1980). She was paired opposite Rajesh Khanna in the action-comedy film Maha Chor, the suspense film Chakravyuha and in the Punjabi film Sawa Lakh Se Ek Ladaun. 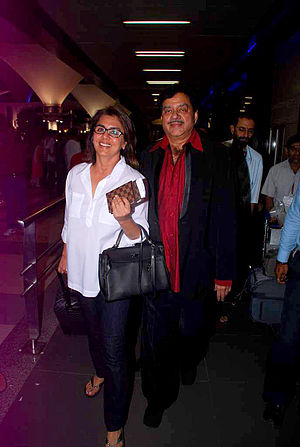 Singh in 2012, standing with Shatrughan Sinha who she worked with in the film Kaala Patthar (1979)

Neetu was 21 when she married Kapoor in January 1980. She was at the top of her career, having just been nominated for a Filmfare Award as Best Supporting Actress for Kaala Patthar (1979),[3] but she retired.[1] She dismissed allegations that she left the film industry, as part of the Kapoor tradition which forbids women from acting in films, claiming that it was her 'personal choice.'[4][5]She made a comeback to films after 26 years, appearing opposite her husband in Love Aaj Kal (2009), Do Dooni Chaar (2010), Jab Tak Hai Jaan (2012) and Besharam (2013). Singh and Kapoor were awarded "Best Lifetime Jodi" (couple) at the 2011 Zee Cine Awards ceremony.[6]

Neetu Singh was born as Harneet Kaur in Delhi to Punjabi Jat Sikh parents, Darshan Singh and Rajee Kaur.[7] On screen and off, Neetu and Rishi Kapoor fell in love. They tied the knot on 22 January 1980 in Bombay (present-day Mumbai), after a much publicized engagement that was the talk of the Hindi film industry. The couple have two children: Riddhima Kapoor Sahni (born 15 September 1980) and Ranbir Kapoor (born 28 September 1982). Riddhima Kapoor, a fashion designer by profession, married Delhi-based industrialist Bharat Sahni on 25 January 2006 and gave birth to a daughter named Samara on 23 March 2011.[8] Ranbir Kapoor is an actor, who has established a career in Bollywood. On April 30, 2020 at 2:25 PM IST her husband Rishi Kapoor died at the early and saddening age of 67 due to gut-wrenching and gruesome leukemia.[9]

Other awards and honours[edit]

Singh was inducted into the Walk of the Stars, an entertainment hall of fame at Bandra Bandstand in Mumbai, where her hand print was preserved for posterity under her married name Neetu Kapoor.[16]

Share
Retrieved from "https://en.everybodywiki.com/index.php?title=Neetu_Singh&oldid=820133"
Categories:
Hidden categories:
This page was last edited on 19 June 2020, at 16:43.
Content is available under License CC BY-SA 3.0 unless otherwise noted.
This page has been accessed 1,529 times.
Privacy policy
About EverybodyWiki Bios & Wiki
Disclaimers