Arthur Nelder Dawson Jr. (December 18, 1928 – November 18, 2006),[1] was a newspaper executive and civic leader in Alexandria, Louisiana, during the second half of the twentieth century. He was a 50-year career employee[2] of his hometown newspaper, the Alexandria Daily Town Talk, having worked in circulation, advertising, and human resources management. He started with the company as a youthful newspaper carrier and continued to advance up the ranks.

A board member of the Southern Classified Managers Association and a past president and life member of the Newspaper Personnel Managers Association, Dawson was recognized in 1991 by the Louisiana Press Association with inclusion in the group's "50-Year Club." His later newspaper duties including the recruitment of reporters and photographers, most being recent college graduates who were seeking a start in journalism in the small-to-medium-sized market that Alexandria offers.[3] In that capacity, he often worked with the newspaper's veteran managing editor and later executive editor Adras P. LaBorde, I and business editor Cecil Williams. During much of Dawson's tenure, the newspaper was owned by the family of Joe D. Smith, Jr., and his first wife, Jane Wilson Smith, of Alexandria. Smith, like Dawson, completed a half century with the paper. When Smith retired in 1996, the newspaper was purchased by a firm in Indianapolis, Indiana, which subsequently sold to Gannett. With some 40,000 subscribers, The Town Talk is the largest circulating newspaper in central Louisiana.[4]

Dawson was born in Alexandria in Rapides Parish, to Arthur Nelder Dawson, Sr. (1881–1962), and the former Mary Monk (1905–1993).[1] He graduated in 1945 from Bolton High School in the Garden District of Alexandria. Thereafter, he obtained his bachelor's degree from the Baptist-affiliated Louisiana College in Pineville across the Red River from Alexandria. He was president of the Louisiana College student body during his time there. He actually began working for The Town Talk when was twelve years of age.[3]

Also as a college student still affiliated with The Town Talk, Dawson enlisted in the Louisiana National Guard, in which he retired years later at the rank of captain. In his later years, he became an avid deep-sea fisherman in the waters of the Caribbean Sea, the Gulf of Mexico, Alaska, and the Amazon River.[3]

Dawson was predeceased by his wife, the former Billie Maxwell (July 3, 1935 – April 1, 2000), a school teacher and counselor. Mrs. Dawson was originally from Jonesboro, the seat of Jackson Parish. She died of cancer six years before her husband expired.[5] Dawson was a vestryman of St. James Episcopal Church and a veteran member and past president of the Alexandria Optimist Club. He also served as president of the Alexandria/Pineville Young Men's Christian Association board of directors and was active in the United Way, an organization promoted by The Town Talk.[3] 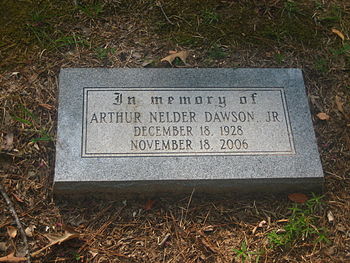 Dawson died in Rapides Regional Medical Center of complications from a fall and heart disease. Services were held on November 26, 2006, in St. James Church, with the Reverend Fred H. Tinsley, Jr., officiating. The Dawsons are interred in Section 7 of Greenwood Memorial Park in Pineville.[6]

Share
Retrieved from "https://en.everybodywiki.com/index.php?title=Nelder_Dawson&oldid=377131"
Categories:
Hidden categories:
This page was last edited on 9 April 2019, at 12:45.
Content is available under License CC BY-SA 3.0 unless otherwise noted.
This page has been accessed 1,151 times.
Privacy policy
About EverybodyWiki Bios & Wiki
Disclaimers