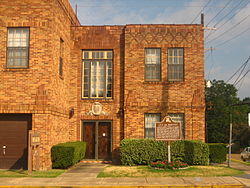 The former Pineville City Hall building was the location of the municipal office of Mayor Floyd Smith from 1966-1970. The building now houses the only museum in Louisiana dedicated to municipal government.

Floyd William Smith, Jr. (September 17, 1932 – February 11, 2010), was a businessman from Winnfield, Louisiana, who served from 1966 to 1970 as the Democratic mayor of Pineville in Rapides Parish. He was a maternal second cousin of former U.S. Representative Speedy O. Long of La Salle Parish in north Louisiana and hence related to various members of the Long family.[1]

In 1950, Smith graduated from Winnfield Senior High School in Winnfield. He was the president of both his junior and senior classes. One of his classmates, later State Representative Jimmy D. Long of Natchitoches, was another cousin. Smith said that the two once got into a boxing competition. Smith was a paternal Smith and a maternal Long, and Jimmy Long was a paternal Long and a maternal Smith, whose mother was the former Ruby Smith (1906–1984). Ruby Smith Long was a sister of another former state representative, the late P.K. Smith of Winnfield, and the aunt of former State Senator Mike Smith, also of Winnfield.[3]

After high school, Smith attended the University of Louisiana at Monroe, as it was later named, for a semester and worked part-time in a clothing factory. In December 1950, Long enlisted in the United States Air Force and served for eight months at Maxwell Air Force Base in Montgomery, Alabama.[4][5] Thereafter, he was employed by the large Central Louisiana Electric Company. From 1962 to 1966, he was chairman of the Pineville Municipal Democratic Executive Committee. He was elected mayor in 1966, having unseated the incumbent P. Elmo Futrell Jr.,[2] by 121 votes. In 1964, in his third year as mayor, Futrell had been named "Mayor of the Year" by the Louisiana Municipal Association.[6]

Smith ran successfully for alderman at-large in 1970,[1] as Fred Baden, a plumber with whom Smith often quarreled, began the first of seven consecutive terms as mayor.[7]

In 1971, Smith left the city council and ran for the Louisiana State Senate against the incumbent Cecil R. Blair of Lecompte in south Rapides Parish. Arnold Jack Rosenthal, an Alexandria businessman and attorney, also entered the race. Smith ran sufficiently strong to force Blair into a runoff, and the third-place candidate, Rosenthal, thereafter endorsed Smith. Blair still prevailed by some two thousand votes and then ran without Republican opposition in the general election held on February 1, 1972.[1]

Thereafter, Smith was named executive assistant to Rosenthal, who was elected as the last finance and utilities commissioner in the city of Alexandria prior to the adoption of a new city charter that established the current mayor-council form of municipal government. Smith remained as the assistant to the commissioner until 1975, when Mayor John K. Snyder and Streets and Parks Commissioner Malcolm P. Hebert dismissed him from the position in a 2–1 vote, which Rosenthal considered to have been invalid and unfair.[1]

After his Pineville and Alexandria years, Smith lived for a time in Houston, Texas, where he sold automobiles. He returned to Winn Parish where he engaged in the sale of timber and land through his company called TLMS, Inc.[4]

In 1983, Smith ran for governor, having geared his campaign toward drawing attention to the poor condition of many Louisiana highways. He polled only 2,314 votes, as Edwin Washington Edwards handily reclaimed the office from the Republican incumbent David C. Treen.[8]

In 1984, Smith polled 4 percent of the vote in a race for the District 5 seat on the Louisiana Public Service Commission. Victory went to the Democrat Donald Lynn "Don" Owen, a former news anchor from station KSLA-TV in Shreveport, who succeeded the retiring Edward Kennon.[9] Smith promised if elected to the commission to halt fuel cost adjustments and advocated a single rate for electricity. He vowed to investigate the contracts of fuel companies and urged the refund of overcharges to consumers.[10]

In 1995 and 1999, Smith ran at the local level for Winn Parish sheriff, but he lost both races to incumbent fellow Democrat James E. "Buddy" Jordan.[11][12] In 2003, Smith waged his final race for office, having contested the Winn Parish seat in the Louisiana House. He lost to the incumbent Thomas D. "Tommy" Wright of Jena,[13] who then won the general election against Republican Tony Kevin Owens (born 1960), also from Jena.[14]

Current Pineville Mayor Clarence R. Fields said that he had developed a relationship with Smith through the years even though Smith had returned to Winn Parish. Fields said that Smith was willing to give advice and share some of his concerns about the city. Similarly, Rapides Parish Police Juror Richard Vanderlick recalled that he and Smith worked together at CLECO in the early 1960s and had remained friends throughout the years. Vanderlick said that Smith "never lost his passion for politics."[1]

Smith was twice married. By the former Helen Jordan, whom he wed in 1953, were born three children: Marilyn S. O'Hare (born 1954), Patricia Smith "Tricia" Hensarling (born 1955), and Robert Ray Smith (1959–1998). Marilyn O'Hare is a financial planner in Baton Rouge and resident of Prairieville, Louisiana. Tricia is State Adult Services Director for the Office of Mental Health and married to Kinard Dale Hensarling (born 1951), a United Methodist minister in Opelousas. Son Robert R. Smith died at the age of thirty-nine.[4][15]

Floyd and Helen Smith divorced in the early 1970s; she remarried and resides in Houston. In 1977, he married the former Shirley McLean, a native of Shreveport, the former wife of Jay Reeves Bond, Sr., of Pineville.[15] The Smiths resided at 188 Floyd Smith Road outside Winnfield.[16]

Smith died of pneumonia at the age of seventy-seven in Rapides Regional Medical Center in Alexandria.[15] In addition to his wife and daughters, he was survived by a sister, Juanita S. Carter of Bossier City, and two stepsons, Jay Bond, Jr. (born c. 1959) of Doyline and Brad Alan Bond (born c. 1961) of Gonzales, Louisiana, three step-grandchildren, and three step-great-grandchildren. Services were held at the chapel of Southern Funeral Home in Winnfield on February 14, 2010. Interment was at Pleasant Hill Cemetery near Winnfield.[15]

Share
Retrieved from "https://en.everybodywiki.com/index.php?title=Floyd_Smith_(Louisiana_politician)&oldid=891211"
Categories:
Hidden categories:
This page was last edited on 24 July 2020, at 18:56.
Content is available under License CC BY-SA 3.0 unless otherwise noted.
This page has been accessed 971 times.
Privacy policy
About EverybodyWiki Bios & Wiki
Disclaimers