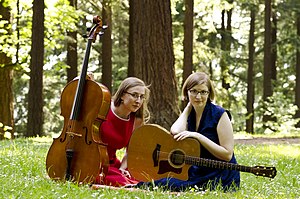 Nerd-folk (also known as nerd folk music, nerd folk, geek-folk or dork-folk[1]) is a musical genre derived from filking that features humorous original songs involving geeky topics performed in a folk style. Laser Malena-Webber and Aubrey Turner of The Doubleclicks credit Marian Call and others with creating the genre.[2] The genre is related to filking and other nerd music genres nerdcore (hip hop) and geek rock (alternative rock).[2]

This article "Nerd-folk" is from Wikipedia. The list of its authors can be seen in its historical and/or the page Edithistory:Nerd-folk. Articles copied from Draft Namespace on Wikipedia could be seen on the Draft Namespace of Wikipedia and not main one.

Retrieved from "https://en.everybodywiki.com/index.php?title=Nerd-folk&oldid=1128697"
Categories:
Hidden category:
This page was last edited on 17 November 2020, at 08:01.
This page has been accessed 301 times.
Content is available under License CC BY-SA 3.0 unless otherwise noted.
Privacy policy
About EverybodyWiki Bios & Wiki
Disclaimers