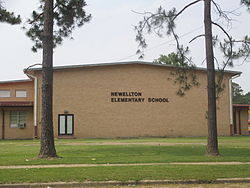 Newellton High School was a rural public high school in Newellton in northern Tensas Parish in northeastern Louisiana located near the Mississippi River. NHS operated throughout most of the 20th century until its closure in 2006 due to declining parish population and student enrollment. Located at 400 Verona Street adjacent to Depot Street, the NHS campus is now the site of Newellton Elementary School, which houses pre-kindergarten through the eighth grade.[1]

Plantation owners in early Newellton relied on governesses to educate their children but need for a public school grew and in 1881 when the first teacher was appointed following the required minimum enrollment of ten pupils being reached.[2] At first the school used Grange Hall, a building provided by The Grange - an alliance of cotton farmers.[2] In 1886 a purpose-built school hall was constructed on the lake front. This was gradually expanded until in 1925 a brick-built dedicated Newellton High School was opened.[2][3] In just a few years this required expansion as enrollment reached three hundred.[2]

Newellton High School was twice renovated. A second structure was completed in 1957 under Superintendent A. E. Swanson.[4] Another major renovation followed in 1976, as parts of the preceding facility were torn down and rebuilt, and the gymnasium/auditorium was refurbished. During its existence, NHS first served grades one through eleven. In 1948, the twelfth grade was added throughout Louisiana.

During the 1960s, Newellton High School won two district football championships and was the runner-up at the state competition in its division. Later Mayor Edwin G. Preis (1916-2011) and another businessman, Orrice R. Barnes (1921-1996), the Western Auto dealer,[5] were the announcers for the home football games.[6]

In August 1970, NHS was desegregated by federal court order, following the ruling by the US Supreme Court that segregation of public schools was unconstitutional. By the 1970s and 1980s, kindergarten and pre-kindergarten were added.

At the close of the 2005-2006 academic year, there were only seventy-four pupils in the high school grades.[7] On May 18, 2006, the Tensas Parish School Board voted by a four-to-three margin to keep Newellton High School open for at least one additional year. However, parish Superintendent Carol Shipp Johnson had proposed that Newellton grades 9-12 be reassigned to St. Joseph, the parish seat, where they would attend Joseph Moore Davidson High School, which served grades 7-12 and also had a low enrollment. Grades 7-8 attend Tensas High School except for the pupils in those grades in Newellton, who remain with the elementary campus there. The former Davidson High School was named for Joseph Moore Davidson (born 1894),[8] who died in battle shortly before the armistice was signed in 1918 ending World War I.

Ultimately, financial considerations compelled the consolidation of Newellton and Davidson schools into the rearranged Tensas High School at the Davidson campus in St. Joseph. It is located across the highway from the St. Joseph Baptist Church and near the central office of the school board. Violence broke out at the consolidated school on November 2, 2006, and fourteen male students were arrested by the office of Sheriff Rickey Jones.[9]

Newellton High School lost a popular English teacher in the spring of 2006, when William Randolph "Randy" Achey(born 1952), a native of Virginia and former Alabama resident, died of heart failure. His memorial service was held in the school gymnasium.[10]

Newellton High School had a relatively new facility and the board was reluctant to abandon a structure still in good condition, even though enrollment numbers were too low. The athletic teams known as "The Bears" drew enthusiastic support from the community for many years. The football teams usually played rivals at Davidson High School or other schools in Tallulah, Mangham, or Delhi.[11] For years, Edgar Allan "Jack" Poe (1916-1994) of Newellton wrote the "Our Bears" column in the parish weekly newspaper, The Tensas Gazette.

Citing low enrollments, the school board had already closed Waterproof High School, which is listed on the National Register of Historic Places,[12] and Lisbon Elementary School, both in the economically depressed town of Waterproof in the southern part of Tensas Parish.

In 2011, the remaining Newellton Elementary School, which is 85 percent African American, enrolled 219 of the approximately 760 public school pupils in Tensas Parish. 95 percent of students are eligible for federal Title I assistance.[13]

Retrieved from "https://en.everybodywiki.com/index.php?title=Newellton_High_School&oldid=1613820"
Categories:
Hidden categories:
This page was last edited on 9 April 2021, at 14:25.
This page has been accessed 93 times.
Content is available under License CC BY-SA 3.0 unless otherwise noted.
Privacy policy
About EverybodyWiki Bios & Wiki
Disclaimers