Nicaragua–Switzerland relations refers to the diplomatic relations between Nicaragua and Switzerland. Both nations are members of the United Nations and the Red Cross.

In 1821 Nicaragua gained its independence from Spain and in 1838 was made a republic. Switzerland recognized the state soon after it was founded. In 1936 the Federal Council appointed an honorary consul in Nicaragua. Diplomatic relations were begun in 1957, and between 1968 and 1976 Switzerland maintained an embassy in the capital Managua. The Swiss started its activities in Nicaragua following the overthrow of the Somoza dictatorship in 1979. Furthermore, a number of Swiss joined the brigades formed to help in the country’s reconstruction. The SDC has operated a cooperation office for Central America out of Managua since 1990.

The volume of trade between Switzerland and Nicaragua is moderate. In 2014, Switzerland imported goods worth a total of CHF 9.08 million from Nicaragua, mainly agricultural products including coffee and bananas. Swiss exports to Nicaragua stood at around CHF 5.15 million, composed mainly of machinery, basic chemical products and metal goods. 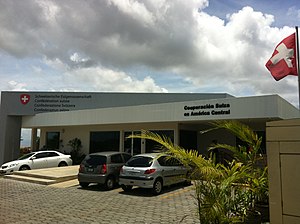 There were 240 Swiss nationals living in Nicaragua at the end of 2013.

Others articles of the Topics Politics AND Switzerland : Swiss sovereign money referendum, 2018

Others articles of the Topic Nicaragua : American Nicaraguan School

Retrieved from "https://en.everybodywiki.com/index.php?title=Nicaragua–Switzerland_relations&oldid=938185"
Categories:
Hidden categories:
This page was last edited on 9 August 2020, at 22:18.
This page has been accessed 230 times.
Content is available under License CC BY-SA 3.0 unless otherwise noted.
Privacy policy
About EverybodyWiki Bios & Wiki
Disclaimers