The Nickelodeon Kids' Choice Awards (also known as the KCAs or Kids' Choice) is an annual U.S. children's awards ceremony show that is produced by Nickelodeon. Usually held on a Saturday night in late March or early April, the show honors the year's biggest in television, movie, music, and sports as voted by viewers worldwide of Nickelodeon networks. Winners receive a hollow orange blimp figurine, a logo outline for much of the network's 1984–2009 era, which also functions as a kaleidoscope.[1]

The show features numerous celebrity guests and musical acts. Since 2002, slime stunts have been incorporated into the show. The KCAs also host live entertainment. It has also been known to exceedingly cover people with the network's trademark green slime. The animated series SpongeBob SquarePants has won the most KCA awards, with eighteen overall through the series' run. Individually, Disney Channel actress Selena Gomez has won the most trophies with eleven, followed by Will Smith (10) and Adam Sandler (10). Whoopi Goldberg is the only person to have won a Kids' Choice Award, alongside the prevailing "EGOT" combination of an Emmy, Grammy, Oscar, and Tony. Rosie O'Donnell has hosted the show eight times, followed by Jack Black who hosted three times, and Whitney Houston and John Cena who both hosted twice.

Alan Goodman, Albie Hecht, and Fred Seibert created the awards show after Nickelodeon produced a segment called The Big Ballot[2][3][4][5][6][7] for the movie review show Rated K: For Kids by Kids in 1987, named for the ballots kids voted with. To vote, the viewers would send in ballots and then before the show, the ballots would be counted and the winners would tape a "thank you" video that would be shown during the program. Goodman, Hecht, and Seibert felt that the network needed a bigger, more exciting platform.

Hecht selected the awards logo from a series of network designs created by original logo designers Tom Corey and Scott Nash (Corey McPherson Nash, Boston), overseen by Goodman and Seibert (Fred/Alan, Inc., New York).[8] The award was configured into the current blimp shape/kaleidoscope in 1990.[9] The only change to the award since then has been a change to the embossed logotype on the side of the trophy for 2010 to fit the network's new logo typeface.

As the Internet came into widespread use, the voting finally moved from a combination of 900 number telephone voting and filling paper ballots that were either mailed or completed at Pizza Hut locations, to being conducted exclusively on the network's website, and included text messaging by 2007. During the early years of Internet voting, there were several issues, including the digital equivalent of ballot stuffing and adult voting. As a result, a new system was put into place where one vote per Nick.com account is allowed (although it is probable adults still cast votes via the texting option, which is connected to a phone number only instead of a screen name, by creating an account with a false age, or by having their children vote for a chosen subject instead). In 2010, an iPhone application and mobile browser voting were also added.[10]

Unlike traditional awards shows, the Kids' Choice Awards uses other items to announce an award winner instead of a traditional envelope. The show sometimes uses balloons, T-shirts, models, giant letters, stickers, and even a foot.

Voting became available for Canadian people in time for the 2010 ceremony, owing to the inauguration of Nickelodeon's Canadian service in November 2009.

This table shows the awards from the past. An asterisk next to a category indicates an award has been presented in that particular category every year since the inception of the Kids' Choice Awards in 1988. 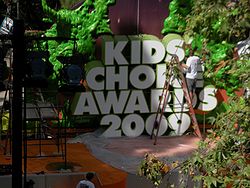 Finishing up with the "Orange Carpet" for the Kids' Choice Awards outside of Pauley Pavilion, UCLA campus

The Kids' Choice Awards are typically held in and around Southern California. Previous ceremonies have been held at the Barker Hangar in Santa Monica, California, the Hollywood Bowl, the Grand Olympic Auditorium in Los Angeles, and Universal Studios Hollywood in Universal City, but mostly at Pauley Pavilion on the UCLA campus. After renovations to Pauley beginning in 2011, the show was moved to the Galen Center at USC;[16] it was expected to be a temporary home, but the network retained Galen for the 2012–14 ceremonies due to the construction of the Meyer and Renee Luskin Conference and Guest Center, making it difficult to have the "Orange Carpet"; the smaller Kids' Choice Sports had its first ceremony in 2014 at Pauley. For the 2015 and 2016 shows, the ceremony occurred at the remodeled Forum in Inglewood, California. Between the 2017 and 2019 shows, the venue alternated between the Galen Center and The Forum.[17]

The 2020 awards, previously scheduled for March 22, were postponed due to the COVID-19 pandemic; a spokesperson said that Nickelodeon "will have further information about a new date in the future."[13] The ceremony was later moved to May 2 to be held virtually.[14][15] The 2020 show was planned to serve as a tie-in with Nickelodeon's Slimefest event.[12]

Recipients of these special awards do not win orange blimps like for the regular awards.

The Hall of Fame Award[edit]

The Hall of Fame Award was a gold version of the blimp award from 1991–2000, and was presented to those whose accomplishments, fame and popularity set them above everyone else. Initially, the award was chosen by the kids from a slate of nominees. Actors, athletes and singers were all eligible for the award, with ballots containing nominees from multiple categories.

The Wannabe Award was a silver version of the blimp award from 2001–2008, and was presented to the best celebrity role model or inspiration (or the person whom the kids want to be like). The winner was determined prior to the awards without voter input. As of 2009, the only person to have won the Wannabe award and the Hall of Fame award is Will Smith.

The Big Green Help Award (later titled as The Big Help Award) was an award presented to a person who goes above and beyond to help the environment.[34] It is based on Nickelodeon's The Big Help initiative. The award was originally green when first awarded in 2009, but later changed to silver along with a name change of the award the following years.

The Nickelodeon Lifetime Achievement Award was a golden version of the blimp award and was presented to a network employee on or off camera that has contributed heavily to the network's success and entertained children with their work. The only winner of this award was Dan Schneider in the 2014 ceremony.

The Generation Change Award is presented to those who have worked to bring positive changes for the new generation of kids. The award was originally introduced in the 2019 Kids' Choice Sports ceremony, but has since carried over to the main ceremony. 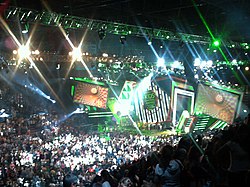 The final slime at the 2010 Kids' Choice Awards

During a ceremony, sometimes a celebrity presenter or award winner might not know when they are going to be slimed onstage or offstage, though as the years went on, getting slimed became more of an honor, and less of a comedic humiliation akin to the early Nickelodeon series You Can't Do That on Television, from whence the concept originated. Hosts of the show have also been slimed, and occasionally celebrities not attending the awards have been slimed via video segment, such as when Rosie O'Donnell tricked Melissa Joan Hart into getting slimed on the set of Sabrina the Teenage Witch in 2001, or when Amanda Seyfried and Josh Hutcherson were slimed at a KCA watch party in 2013. Celebrities sitting in the audience are also fair game for being slimed, as Mandy Moore first learned in 2007, and Halle Berry later found out in 2012.

Although Les Lye was the only celebrity to be slimed at the 1988 awards, a video was shown during the show of then Nickelodeon president Geraldine Laybourne saying the magic words and getting slimed with the original YCDTOTV recipe, much to her dismay, proving that not even the network president was safe from the slime.[41]

Below is a list of all the celebrities that have been slimed over the past years at the Kids' Choice Awards.

Share
Retrieved from "https://en.everybodywiki.com/index.php?title=Nickelodeon_Kids%27_Choice_Awards&oldid=2056805"
Categories:
Hidden categories:
This page was last edited on 9 September 2021, at 05:39.
Content is available under License CC BY-SA 3.0 unless otherwise noted.
This page has been accessed 125 times.
Privacy policy
About EverybodyWiki Bios & Wiki
Disclaimers