Norman Staunton Dike Jr. (19 May 1918 – 23 June 1989) was an officer of the United States Army who later served in the U.S. Army Reserve. During World War II he was a lieutenant and captain in the 101st Airborne Division, where one assignment was company commander of Easy Company, 2nd Battalion, 506th Parachute Infantry Regiment. After World War II, he became a lawyer and businessman and eventually became a permanent resident of Switzerland. Dike was portrayed in the HBO miniseries Band of Brothers by Peter O'Meara. 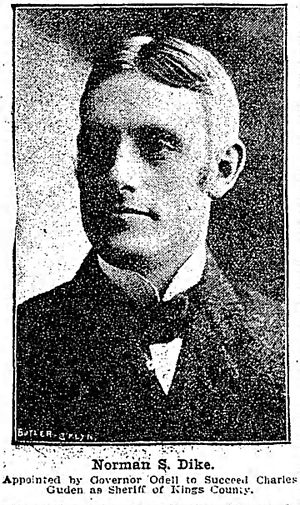 Dike was born to Norman Staunton Dike Sr., a New York State Supreme Court judge, and Evelyn M. Biddle on 19 May 1918.[1][5] He was a 1937 graduate of St. Paul's School. In May 1939, Dike's parents divorced and his mother married Randolph Chandler of Thompson, Connecticut in October of the same year. Normand (sic) Dike (mother: Eveylen (sic) Chandler) was listed on the 1940 United States Census as having been a resident of Thompson for at least five years. He attended Brown University and, as a freshman, pledged to Psi Upsilon fraternity.[6] Dike graduated Brown in 1941.[1][5][7] He studied at Yale Law School prior to June 1942, but did not graduate before entering the US Army. He married Barbara Tredick Dimmick McIntire on 20 June 1942.[5]

Dike was commissioned as a second lieutenant in the US Army in August 1941.[5]

Dike attended the Cavalry School at Fort Riley, Kansas. He was promoted to first lieutenant on 20 December 1942. He volunteered for airborne duty and, after attending Parachute School, was assigned to the 506th Parachute Infantry Regiment. In June 1944, he parachuted into occupied France as part of the Normandy Invasion.[8]

In September 1944, during Operation Market Garden, Dike, assigned as the assistant S-2 (Intelligence Officer) of the 506th Parachute Infantry Regiment, jumped into the Netherlands.[8][10] Dike was awarded a Bronze Star for his actions between 23 and 25 September 1944 at Uden, Netherlands. Within the 101st Airborne Division, Dike "organized and led scattered groups of parachutists in the successful defense of an important road junction on the vital Einhoven (sic)-Arnhem Supply Route against superior and repeated attacks, while completely surrounded."[7][8]

During the first week of November 1944, after Lieutenant Frederick Heyliger, who was commanding Easy Company, 2nd Battalion, 506th Parachute Infantry Regiment, was accidentally shot by a member of Easy Company, Dike was transferred from Division headquarters to replace Heyliger as company commander. Captain Richard Winters, who was the former commander of E Company and was then serving as executive officer of the 2nd Battalion, described Dike as being tall, slim and good-looking and having a military bearing.[11]:166 Winters later wrote of Dike as being an inexperienced officer who, his superiors believed, needed exposure to the front line.[12] Lieutenant Edward Shames did not believe that Dike and some other officers were concerned about casualties but did not explain the basis for his opinion.[13] Dike acquired the pejorative nickname of "Foxhole Norman" among the members of Easy Company.[14]

After the siege of Bastogne was broken on 27 December 1944, operations began to retake the territory lost to the Axis during the Battle of the Bulge.

Dike was awarded a second Bronze Star for his action at Bastogne, in which "he personally removed from an exposed position, in full enemy view, three wounded members of his company, while under intense small arms fire" on 3 January 1945.[7][8]

In preparation for the 13 January 1945 attack on Foy, Belgium, E Company was attached to the 3rd Battalion, 506th PIR.[15] Division Headquarters ordered the attack to begin at 0900 hours. During the assault, Dike led Easy Company forward and ordered 1st platoon to the left, then lost contact with the platoon. Dike ordered the remainder of the company to take cover after coming under fire. With the unit unable to proceed, his subordinates informed him they were going to get killed because they were sitting ducks. At the same time, Winters tried radioing him to tell him the same thing.[11]:209–217

Carwood Lipton, at that time the company's first sergeant, described Dike as having "fallen apart."[11]:209–217 Clancy Lyall stated that he saw that Dike had been wounded in his right shoulder and that it was the wound, not panic, that caused Dike to stop. Winters sent First Lieutenant Ronald Speirs to relieve Dike of his responsibility for the attack and complete it. Dike returned to the rear in the company of a medic; Winters ignored Dike.[16]:251—253 Foy was secured by 1300 hours.[16]:251—253

During the evening of 13 January, Winters recommended and Colonel Robert Sink approved permanently replacing Dike with Speirs.[16]:251—253 Dike was transferred to 506th Regimental Headquarters to become an assistant operations officer.[12]

Dike was promoted to captain on 1 April 1945.[8] He became an aide-de-camp to General Maxwell Taylor, Commanding General, 101st Airborne Division.[12][11]:250 He participated in the campaign in southern Germany.[8]

After World War II, Dike remained in the U.S. Army Reserve and served during the Korean War, eventually attaining the rank of lieutenant colonel. He resigned his commission in 1957.[1]

In late June 1946, Barbara McIntire Dike was granted a divorce from Norman Dike in Reno, Nevada[17]

Dike received his law degree from Yale Law School in 1947, became a member of the New York Bar in 1949 and the District of Columbia Bar in 1954. From 1950–1953, he was a U.S. Commissioner in Japan. He also worked for the Central Intelligence Agency from 1951–1953. He then practiced law in New York City and in Washington, D.C. He was a member of the legal fraternity Phi Delta Phi.[18]

In 1954, Dike moved to New Mexico to prospect for uranium.[19] He was an officer of the U.S. Uranium Company, United Western Minerals Company and other oil and mining interests in Santa Fe, New Mexico, and Las Vegas, Nevada.[1] On 12 March 1957, Dike wed Catherine Pochon; his residences were listed as Thompson, Connecticut, and Santa Fe.[20] In October 1958 Dike was elected to the Board of Trustees of the Theodore Roosevelt Association. He visited Thompson, Connecticut and Providence in November 1958. In 1959, Dike, his wife and baby left Santa Fe for Switzerland; it was his intention to study at the International School of Law at The Hague. Dike resigned his positions as vice president and comptroller of United Western Minerals Company in Santa Fe but continued as a director.[21] By 1959, he had established a law practice in Lausanne, Switzerland.[22] In 1960, Dike became a permanent resident of Switzerland.[1]

Dike died in Rolle, Switzerland, on 23 June 1989 after a long illness. He was survived by his two daughters, his son, and two grandchildren.[1][23]

Dike is portrayed in the 2001 HBO miniseries Band of Brothers by Irish actor Peter O'Meara.

Share
Retrieved from "https://en.everybodywiki.com/index.php?title=Norman_Dike&oldid=939212"
Categories:
Hidden categories:
This page was last edited on 10 August 2020, at 03:34.
Content is available under License CC BY-SA 3.0 unless otherwise noted.
This page has been accessed 650 times.
Privacy policy
About EverybodyWiki Bios & Wiki
Disclaimers