On June 1, 1894, King Gojong requested military aid from the Qing to put down the Donghak Peasant Revolution as they were nearing Seoul, Korea. On June 6, 1894, the Qing sent about 2,465 troops and landed in Inchon, Korea, and marched to Asan. The Japanese, however, were infuriated by the Qing's violation of the Convention of Tientsin for not notifying their government. The rebels agreed to a truce with the Joseon government to focus on keeping foreign interventions in check. But the Japanese became convinced that the rebellion would call for their intervention; the Japanese sent in the IJA 9th Infantry Brigade, also styled the “Ōshima Combined Brigade,” of 8,000 soldiers and landed in Chemulpo, Korea and marched onto Seoul to counterbalance the Qing.[1][2][3] Minister Plenipotentiary to Korea Ōtori Keisuke demand the Joseon Government to reform, but they refused and demanded them to withdraw. The Qing and the Japanese failed to cooperate to reform Joseon, Mutsu Munemitsu ordered Ōtori to take any measures to compel them to reform. Ōtori ordered Major-General Ōshima Yoshimasa to attack Gyeongbokgung Palace. Before the dawn of July 23, 1894, Ōshima Yoshimasa sent a telegram to the Chief of General Staff Ōyama Iwao to let him know he would attack the Korean royal palace. He informed him that he would lay siege to the palace the following morning.[4]

On 23 July 1894, the IJA 9th Infantry Brigade surrounded the Gyeongbok Palace and engaged the palace garrison in a firefight with rifles, machine guns, and artillery. Despite the fierce resistance from the newly modernized palace garrison, the Japanese breached the gates and overran the palace. They engaged in hand-to-hand combat with the interior defenses and massacred the palace attendants and officials. With overwhelming odds, the King surrendered, and the Japanese disarmed the garrison.[5][citation needed] 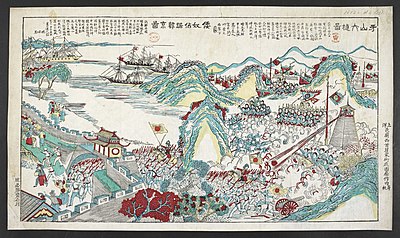 Japanese troops storm the palace capturing King Gojong (bottom left) while the rest of their army engages the Qing at Seonghwan, Korea.

King Gojong surrendered political control to his father and replaced the existing Korean government with the pro-Japanese faction to expel the Qing and begin the Gabo Reform.[6] On 24 July 1894, Ōshima Yoshimasa telegrammed the Chief of General Staff, outlining the attack. Because the Qing Government did not inform the Japanese Government of the King's request for aid, the Japanese started preparations to attack the Qing forces at Asan, leading to the Battle of Seonghwan of the First Sino-Japanese War which they won.[7] Japan won the war, and China signed the Treaty of Shimonoseki in 1895. The treaty forced the Qing to recognize "the full and complete independence and autonomy of Korea," thus ending Korea's tributary relationship with the Chinese Qing Dynasty and achieving its independence in 1895.

Other articles of the topics North Korea AND South Korea : 2013 Korean crisis

Other articles of the topic Japan : Jun Kusanagi, Tsubaki Sannomiya, Corporate Contribution Programme, Shochiku Studio Co., Ltd., Chiharu Nakai, Naho Ozawa, Fuko, Ｐ-Chan
Some use of "" in your query was not closed by a matching "".

Retrieved from "https://en.everybodywiki.com/index.php?title=Occupation_of_Seoul&oldid=1846099"
Categories:
Hidden categories:
This page was last edited on 31 July 2021, at 17:16.
This page has been accessed 101 times.
Content is available under License CC BY-SA 3.0 unless otherwise noted.
Privacy policy
About EverybodyWiki Bios & Wiki
Disclaimers
Dark mode