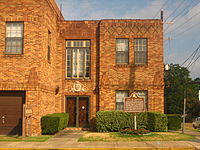 The City Hall building during the administration of Mayor P. Elmo Futrell Jr., now houses the only museum in Louisiana dedicated to municipal government.

Perry Elmo Futrell Jr. (October 7, 1916 – December 4, 1993),[1] was a real estate broker and appraiser who served from 1962 to 1966 as the Democratic mayor of Pineville, a city located east of the Red River across from Alexandria in Rapides Parish in Central Louisiana.[2]

On July 1, 1942, Futrell enlisted at Camp Beauregard in Pineville into the United States Army Air Corps, forerunner to the Air Force.[5]

Futrell did appraisal work for the Louisiana Department of Transportation and Development. In 1975, in a suit regarding five acres of property off U.S. Highway 71 northwest of Campti in Natchitoches Parish, the state sought to declare Futrell as an expert appraiser. The trial judge immediately agreed that Futrell had the qualifications to appraise the property: "I don't want to cut you short, but Mr. Futrell has been qualified numerous times in this court and I would be willing to accept him on the basis of what I already know about him."[6]

In 1963, after less than a year in office, Futrell and the five-member city council faced a recall attempt after Pineville police began the shooting on sight of stray dogs because of several instances of dog bites. The petition signers also objected to the city having initiated a street improvement campaign which charged residents directly for the costs of paving. Johnnie A. Mounce, who owned seven dogs and operated an outboard motor business, launched a petition to remove the officials. "It's awful the way they’ve been running down and shooting dogs in streets and in yards. They’ve already hit one child. And then, they're forcing people to pay for paving their streets. People who can't pay can lose their homes. I just don’t think it's right. So I’m trying to call for another election," Mounce said. Futrell said that the law calling for the shooting of stray dogs has been on the books for years but rarely previously enforced. Futrell ordered the crackdown but stressed only dogs whose owners could not be located or those animals which could not be caught were being shot.[11]

In 1964, his third year in office, Futrell was named "Mayor of the Year" by the Louisiana Municipal Association.[12] Despite weathering the recall attempt and "Mayor of the Year" honors, Futrell was narrowly unseated in the Democratic primary election in the spring of 1966 by his fellow Democrat, Floyd W. Smith Jr., a native of Winnfield.[2] After a single term as mayor, Smith was succeeded in 1970 by Fred Baden, who held the post for twenty-eight consecutive years.

Futrell, who was of German descent,[13] was married to the former Mildred Russell (1921-2011), a native of Jena in La Salle Parish, whom he met at Northwestern State University. After his death, she left Pineville to live in Baton Rouge.[14] The couple had two sons, Ronnie Elmo Futrell (1949-2015), a Louisiana College graduate and warden at Work Training Facility-North, and his wife, the former Elizabeth Gay Sontag;[15] and Russell W. Futrell (born 1953) of Baton Rouge, who was in Saudi Arabia at the time of his father's death. Their daughter, Sandra Gail Futrell Kirkpatrick (born 1945) of Baton Rouge, is the widow of Thomas Killgore Kirkpatrick (1944–2009), a son of political figures Claude and Edith Killgore Kirkpatrick. The couple married in 1965 at the First Baptist Church of Pineville.[16]

Futrell had two surviving sisters, Pauline F. Cain and Gladys F. Morrison, both of Pineville, and five grandchildren.[1] Grandson William Marshall "Bill" Futrell (1972-2009), one of two sons of Ronnie and Elizabeth Futrell, a veteran of the Louisiana National Guard, and a law enforcement officer, died in Pineville at the age of thirty-seven.[17]

Futrell was a deacon at the First Baptist Church of Pineville, often considered the home church for Louisiana College. He died in Dallas, Texas, at the University of Texas Southwestern Medical Center, then known as Zale Lipshy University Hospital. Perry and Mildred Futrell are interred at Forest Lawn Memorial Park in Ball north of Pineville.[1]

Retrieved from "https://en.everybodywiki.com/index.php?title=P._Elmo_Futrell_Jr.&oldid=941570"
Categories:
Hidden categories:
This page was last edited on 10 August 2020, at 16:35.
This page has been accessed 488 times.
Content is available under License CC BY-SA 3.0 unless otherwise noted.
Privacy policy
About EverybodyWiki Bios & Wiki
Disclaimers