PNC Cognitio School (PNCCS) is a private educational institution located in Whitefield, Bangalore, India. It was founded in 2017 by Mr. Ramanjaneya SRB who is also the Chief Executive Officer and Managing Director of the school. It is a Cambridge International School being affiliated to the Cambridge Assessment International Education.[1] Students of PNCCS take the International General Certificate of Secondary Education (IGCSE) examinations at the end of the 10th grade.[2] The school also has opportunities for Cambridge AS/A Level students. The school has adopted the Finnish Model of Education.[3]

PNC Cognitio School was established in June, 2017 and was inaugurated by the then Chief Minister of Karnataka Mr. Siddaramaiah on 13 September 2017. 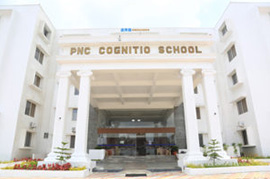 The school is equipped with learning centers, research points for Physics, Chemistry and Biology, techno groove, creativity corner, music room, activity room, nutrition charger, an infirmary and a resource chamber for every child to enjoy schooling. The school also has an elevator and a ramp for kids with different abilities to travel with ease.

The school offers a basketball court, semi-Olympic size swimming pool, a throwball court, a football pitch, two cricket nets and a skating rink with professional coaches for every Cognition to be healthy and fit. The school makes it compulsory for all the kids to play at least one hour of sports of their choice everyday.

Security and maintenance staff are assigned to each floor of the school. CCTV cameras are placed in every hallway, stairwell, sports field and one in every classroom. The school demands for an identity at the security gate before entering the campus to provide high security.[4] Trackers in every ID card help the school monitor students and teachers in the campus and disable them to access unauthorized places.

The transport department coordinates 11 air-conditioned buses travelling to different parts of Bangalore. The buses are GPS enabled and offer a text messaging system available for parents to be alerted of bus arrival estimations via text message. Each bus is assisted with a female caretaker. Regular observations are done in the routes of buses to ensure hassle-free, on-time arrivals and departures.

The lunch is offered to the students by the school which usually includes a four-course meal.[5] The menu varies daily and is available on the school's official website and app specially designed for parents.

The school had introduced nine clubs, together called the Navrathna in the Academic Year 2019-20. The school clubs have the prefix 'philia' which denotes fondness for something.

Investiture Ceremony of the Navrathna Clubs

PNC Cognitio School hosts a wide variety of programs both for entertainment as well as to raise awareness. Seed-ball Activity is a programme conducted on World Environment Day where parents, students, and teachers make balls of compost and embed a seed into it and throw it. When it rains, the seeds sprout.

[6] Project Expo is an annual exhibition of PNC Cognitio where students demonstrate their ideas and views on various topics using creative models and technology which they build with the help of teachers and other craftsmen.[7] Cognifete is the annual day of PNC Cognitio School where dance, music and other performing arts are done by the students on a particular theme which differs every year.

[8] Understand Through Me (UTM) is an initiative by PNCCS to make the students directly explain the concepts learned in school to their parents. Sports Day is celebrated annually where students showcase their sportive skills and win prizes.

Hall of Fame - It's Achievements[edit]

It was in the first year when PNCCS won the Best Upcoming International School award.

Krithik and Shanmukh of Grade 7 and Dinesh T M of Grade 9 had won the runner-up in the senior category of App Design in Design Championship held during the academic year 2019-20.

The students of Grade 9 introduced an e-newsletter for the school which can be accessed on http://www.cnnpnccs.blogspot.com.

Sportive Skills Showcased by the Sprinters

Share
Retrieved from "https://en.everybodywiki.com/index.php?title=PNC_Cognitio_School&oldid=941762"
Categories:
Hidden categories:
This page was last edited on 10 August 2020, at 17:02.
This page has been accessed 1,085 times.
Content is available under License CC BY-SA 3.0 unless otherwise noted.
Privacy policy
About EverybodyWiki Bios & Wiki
Disclaimers
Dark mode