Fincham is the younger brother of television producer Peter Fincham.[1] Educated at the independent Tonbridge School, Fincham read music at Gonville and Caius College, Cambridge, where he was music director of the Cambridge Footlights. In 2012, following a career in the corporate world,[2] Fincham returned to composing, based in London.[3] 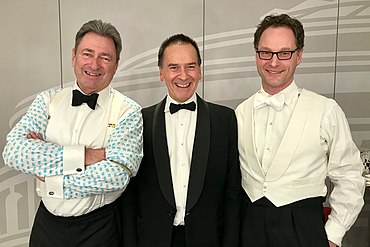 In 2018, Fincham was commissioned by the British Museum to write a new work inspired by their Celtic Collection. On 21 June 2018, along with his violin piece, Suilven, Awen (meaning poetic inspiration in ancient Welsh/Breton/Cornish) was premiered by the London Philharmonic Choir under their artistic director, Neville Creed.[1]

Fincham's first opera The Happy Princess, based on "The Happy Prince" by Oscar Wilde, with a libretto by Jessica Duchen, was premiered by the Youth Company at Garsington Opera in August 2019.[8][not in citation given][citation needed]

Retrieved from "https://en.everybodywiki.com/index.php?title=Paul_Fincham&oldid=1023931"
Categories:
Hidden categories:
This page was last edited on 1 October 2020, at 11:10.
This page has been accessed 69 times.
Content is available under License CC BY-SA 3.0 unless otherwise noted.
Privacy policy
About EverybodyWiki Bios & Wiki
Disclaimers