Paul Anthony Samuelson (15 May 1915 – 13 December 2009) was an American economist and the first American to win the Nobel Memorial Prize in Economic Sciences. The Swedish Royal Academies stated, when awarding the prize in 1970, that he "has done more than any other contemporary economist to raise the level of scientific analysis in economic theory".[4] Economic historian Randall E. Parker has called him the "Father of Modern Economics",[5] and The New York Times considered him to be the "foremost academic economist of the 20th century".[6]

Samuelson was likely the most influential economist of the later 20th century.[7] In 1996, when he was awarded the National Medal of Science, considered to be America's top science-honor, President Bill Clinton commended Samuelson for his "fundamental contributions to economic science" for over 60 years.[4] Samuelson considered mathematics to be the "natural language" for economists and contributed significantly to the mathematical foundations of economics with his book Foundations of Economic Analysis.[8] He was author of the best-selling economics textbook of all time: Economics: An Introductory Analysis, first published in 1948.[9] It was the second American textbook that attempted to explain the principles of Keynesian economics. It is now in its 19th edition, having sold nearly 4 million copies in 40 languages, including Russian, French, Greek, Slovak, Chinese, Portuguese, German, Spanish, Polish, Japanese, Czech, Vietnamese, Hungarian, Indonesian, Swedish, Croatian, Dutch, Turkish, Hebrew, Italian, and Arabic.[10] James Poterba, former head of MIT's Department of Economics, noted that by his book, Samuelson "leaves an immense legacy, as a researcher and a teacher, as one of the giants on whose shoulders every contemporary economist stands".[4]

He entered the University of Chicago at age 16, during the depths of the Great Depression, and received his PhD in economics from Harvard. After graduating, he became an assistant professor of economics at Massachusetts Institute of Technology (MIT) when he was 25 years of age and a full professor at age 32. In 1966, he was named Institute Professor, MIT's highest faculty honor.[4] He spent his career at MIT where he was instrumental in turning its Department of Economics into a world-renowned institution by attracting other noted economists to join the faculty, including Robert M. Solow, Franco Modigliani, Robert C. Merton, Joseph E. Stiglitz, and Paul Krugman, all of whom went on to win Nobel Prizes.

He served as an advisor to Presidents John F. Kennedy and Lyndon B. Johnson, and was a consultant to the United States Treasury, the Bureau of the Budget and the President's Council of Economic Advisers. Samuelson wrote a weekly column for Newsweek magazine along with Chicago School economist Milton Friedman, where they represented opposing sides: Samuelson, as a self described "Cafeteria Keynesian",[7] claimed taking the Keynesian perspective but only accepting what he felt was good in it.[7] By contrast, Friedman represented the monetarist perspective.[11] Samuelson died on 13 December 2009, at the age of 94.

Samuelson was born in Gary, Indiana, on 15 May 1915, to Frank Samuelson, a pharmacist, and the Ella née Lipton. His family, he later said, was "made up of upwardly mobile Jewish immigrants from Poland who had prospered considerably in World War I, because Gary was a brand new steel-town when my family went there".[6] In 1923, Samuelson moved to Chicago where he graduated from Hyde Park High School (now Hyde Park Career Academy). He then studied at the University of Chicago and received his Bachelor of Arts degree there in 1935. He said he was born as an economist, at 8.00am on January 2, 1932, in the University of Chicago classroom.[7] The lecture mentioned the cause was on the British economist Thomas Malthus, who most famously studied population growth and its effects.[12] Samuelson felt there was a dissonance between neoclassical economics and the way the system seemed to behave; he said Henry Simons and Frank Knight were a big influence on him.[13] He next completed his Master of Arts degree in 1936, and his Doctor of Philosophy in 1941 at Harvard University. He won the David A. Wells prize in 1941 for writing the best doctoral dissertation at Harvard University in economics, for a thesis titled "Foundations of Analytical Economics", which later turned into Foundations of Economic Analysis. As a graduate student at Harvard, Samuelson studied economics under Joseph Schumpeter, Wassily Leontief, Gottfried Haberler, and the "American Keynes" Alvin Hansen. Samuelson moved to MIT as an assistant professor in 1940 and remained there until his death.[14]

During his seven decades as an economist, Samuelson's professional positions included:

Samuelson died after a brief illness on December 13, 2009, at the age of 94.[15] His death was announced by the Massachusetts Institute of Technology.[6] James M. Poterba, an economics professor at MIT and the president of the National Bureau of Economic Research, commented that Samuelson "leaves an immense legacy, as a researcher and a teacher, as one of the giants on whose shoulders every contemporary economist stands".[15] Susan Hockfield, the president of MIT, said that Samuelson "transformed everything he touched: the theoretical foundations of his field, the way economics was taught around the world, the ethos and stature of his department, the investment practices of MIT, and the lives of his colleagues and students".[16]

As professor of economics at the Massachusetts Institute of Technology, Samuelson worked in many fields, including:

Samuelson is considered one of the founders of neo-Keynesian economics and a seminal figure in the development of neoclassical economics. In awarding him the Nobel Memorial Prize in Economic Sciences the committee stated:

More than any other contemporary economist, Samuelson has helped to raise the general analytical and methodological level in economic science. He has simply rewritten considerable parts of economic theory. He has also shown the fundamental unity of both the problems and analytical techniques in economics, partly by a systematic application of the methodology of maximization for a broad set of problems. This means that Samuelson's contributions range over a large number of different fields.

He was also essential in creating the neoclassical synthesis, which ostensibly incorporated Keynesian and neoclassical principles and still dominates current mainstream economics. In 2003, Samuelson was one of the ten Nobel Prize–winning economists signing the Economists' statement opposing the Bush tax cuts.[17]

Stanislaw Ulam once challenged Samuelson to name one theory in all of the social sciences which is both true and nontrivial. Several years later, Samuelson responded with David Ricardo's theory of comparative advantage: "That it is logically true need not be argued before a mathematician; that is not trivial is attested by the thousands of important and intelligent men who have never been able to grasp the doctrine for themselves or to believe it after it was explained to them."[18]

For many years, Samuelson wrote a column for Newsweek. One article included Samuelson's most quoted remark and a favorite economics joke:

In the early editions of his famous, bestselling economics textbook Paul Samuelson joked that GDP falls when a man "marries his maid". (See The Economist, The trouble with GDP).

Paul Davidson on Samuelson as a Keynesian[edit]

Samuelson consistently maintained he was a "Keynesian," albeit a "Cafeteria Keynesian",[7] and eventually, in later editions of his seminal textbook, even a "post-Keynesian."[20] However, Paul Davidson rejected Samuelson's claim,[21] pointing out discrepancies between John Maynard Keynes's system of analysis and Samuelson's: 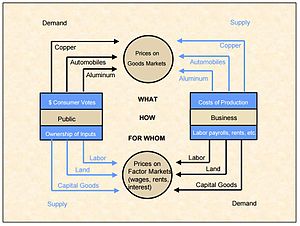 Samuelson's book Foundations of Economic Analysis (1946) is considered his magnum opus. It is derived from his doctoral dissertation, and was inspired by the classical thermodynamic methods.[27] The book proposes to:

in order to derive "a general theory of economic theories" (Samuelson, 1983, p. xxvi). The book showed how these goals could be parsimoniously and fruitfully achieved, using the language of the mathematics applied to diverse subfields of economics. The book proposes two general hypotheses as sufficient for its purposes:

In the first tenet, his views presented the idea that all actors, whether firms or consumers, are striving to maximize something. They could be attempting to maximize profits, utility, or wealth, but it did not matter because their efforts to improve their well-being would provide a basic model for all actors in an economic system.[28] His second tenet was focused on providing insight on the workings of equilibrium in an economy. Generally in a market, supply would equal demand. However, he urged that this might not be the case and that the important thing to look at was a system's natural resting point. Foundations presents the question of how an equilibrium would react when it is moved from its optimal point.[28] Samuelson was also influential in providing explanations on how the changes in certain factors can affect an economic system. For example, he could explain the economic effect of changes in taxes or new technologies.

In the course of analysis, comparative statics, (the analysis of changes in equilibrium of the system that result from a parameter change of the system) is formalized and clearly stated.

The chapter on welfare economics "attempt(s) to give a brief but fairly complete survey of the whole field of welfare economics" (Samuelson, 1947, p. 252). It also exposits on and develops what became commonly called the Bergson–Samuelson social welfare function. It shows how to represent (in the maximization calculus) all real-valued economic measures of any belief system that is required to rank consistently different feasible social configurations in an ethical sense as "better than", "worse than", or "indifferent to" each other (p. 221).

Samuelson is also author (and since 1985 co-author) of an influential principles textbook, Economics, first published in 1948, now in its 19th edition. The book has been translated into forty-one languages and sold over four million copies; it is considered the best-selling economics textbook in history.[citation needed] Samuelson was once quoted as saying, "Let those who will write the nation's laws if I can write its textbooks."[29] Written in the shadow of the Great Depression and the Second World War, it helped to popularize the insights of John Maynard Keynes. A main focus was how to avoid, or at least mitigate, the recurring slumps in economic activity.

Samuelson wrote: "It is not too much to say that the widespread creation of dictatorships and the resulting World War II stemmed in no small measure from the world's failure to meet this basic economic problem [the Great Depression] adequately."[30] This reflected the concern of Keynes himself with the economic causes of war and the importance of economic policy in promoting peace.[31]

Samuelson's influential textbook has been criticized for including comparative growth rates between the United States and the Soviet Union that were inconsistent with historical GNP differences.[32] The 1967 edition extrapolates the possibility of Soviet/US real GNP parity between 1977 and 1995. Each subsequent edition extrapolated a date range further in the future until those graphs were dropped from the 1985 edition.[33]

In 1989, Samuelson commented on the economics of the Soviet Union and Marxism: "Contrary to what many skeptics had earlier believed, the Soviet economy is proof that [...] a socialist, command economy can function and even thrive."[34] The Revolutions of 1989 happened during the same year and the Soviet Union broke up two years later.

Samuelson's book was the second one that attempted to introduce to a wider audience Keynesian economics, yet by far the most successful one. Canadian economist Lorie Tarshis, who had been a student attending Keynes's lectures at Harvard in the 1930s, published in 1947 an introductory textbook that incorporated his Tarshis's lecture notes, titled The Elements of Economics.[35] It was attacked by trustees of, and donors, to American colleges and universities as preaching a "socialist heresy".[21] William F. Buckley Jr. attacked the Tarshis analysis as "communist inspired".[36]

There are 388 papers in Samuelson's Collected Scientific Papers. Stanley Fischer (1987, p. 234) writes that taken together they are "unique in their verve, breadth of economic and general knowledge, mastery of setting, and generosity of allusions to predecessors."

Samuelson was co-editor, along with William A. Barnett, of Inside the Economist's Mind: Conversations with Eminent Economists (Blackwell Publishing, 2007), a collection of interviews with notable economists of the 20th century.

Share
Retrieved from "https://en.everybodywiki.com/index.php?title=Paul_Samuelson&oldid=215520"
Categories:
Hidden categories:
This page was last edited on 10 November 2018, at 11:36.
Content is available under License CC BY-SA 3.0 unless otherwise noted.
This page has been accessed 946 times.
Privacy policy
About EverybodyWiki Bios & Wiki
Disclaimers