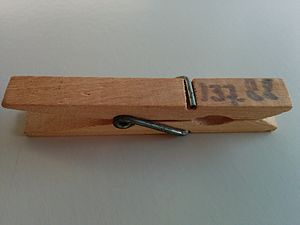 Peg DHCP is a method defined in the April Fools' Day RFC RFC 2322 to assign IP addresses in a context where regular DHCP wouldn't work. The "server" hands out wooden clothes-pegs numbered with the addresses to allocate and an additional leaflet with network information. The "client", typically the user, then configures their device accordingly.

Even though this RFC, "Management of IP numbers by peg-dhcp" was published on the first of April 1998, it describes, unlike most other April Fools' Day RFCs, a regularly used protocol with a serious purpose. During the preparation of Hacking in Progress 1997, the organizers were looking for a robust way to assign IP addresses to the participants. The obvious first choice, DHCP, almost completely defenseless against rogue servers, was not retained considering the traditionally creative use of the network.

Instead, for every address to allocate, the variable (host) part is written on a wooden peg with waterproof marker. The user would then attach it to the cable connecting that device to the network. The peg is accompanied by a leaflet with further information such as the static (net) part of the IP address, the netmask, the default gateway, DNS servers, and often also their MAC addresses to prevent ARP spoofing. Different subnets, such as LAN and WLAN are distinguished by different colors used to write on the pegs.

Peg DHCP was successfully used on Hacking in Progress '97 and the following events in the Netherlands, including the 2009 event Hacking at Random. The German Chaos Computer Club used it during its Chaos Communication Camps and is still using it in some editions of the Chaos Communication Congress.

At Hacking at Random, the pegs were distributed according to the network map of the event terrain. Every field had a distinct subnet and per subnet, there was a division between regular IP address distribution via DHCP and the (fixed) IP addresses, distributed via Peg DHCP. To obtain an IP address via Peg DHCP, one had to note the subnet number on their field's Datenklo (dedicated rain-proof box for networking equipment, usually an empty, portable toilet). With this subnet number, the correct, routable, IP address could be handed out.

This article "Peg DHCP" is from Wikipedia. The list of its authors can be seen in its historical and/or the page Edithistory:Peg DHCP. Articles copied from Draft Namespace on Wikipedia could be seen on the Draft Namespace of Wikipedia and not main one.

Retrieved from "https://en.everybodywiki.com/index.php?title=Peg_DHCP&oldid=943554"
Categories:
Hidden category:
This page was last edited on 11 August 2020, at 07:15.
This page has been accessed 415 times.
Content is available under License CC BY-SA 3.0 unless otherwise noted.
Privacy policy
About EverybodyWiki Bios & Wiki
Disclaimers