Pepperfry is an Indian online furniture marketplace founded in 2011. It partners with furniture merchants and connects them with consumers by listing their products on its website.

Pepperfry was founded by former eBay (India) executives Ambareesh Murty and Ashish Shah in July 2011.[1] The website Pepperfry.com was launched in January 2012 as an online marketplace for furniture and other home décor and furnishing products.[2] According to Bloomberg News, Pepperfry is owned by Trendsutra Platform Services Private Limited, a company registered and headquartered in Mumbai, Maharashtra.[3][4] 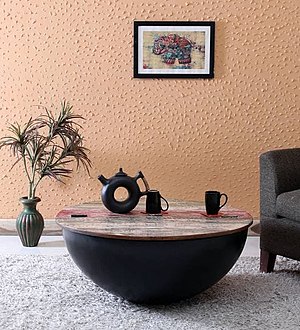 A coffee table by Pepperfry

Pepperfry operates on a ‘managed marketplace’ model.[5] It partners with SMEs in the furniture sector who sell their products through the website. The company has an omnichannel presence.[6] It sells products across categories like furniture, décor, lamps, and homeware.[7]

It is the largest online player in the organized furniture space in India, followed by Urban Ladder, Flipkart, Furlenco, and FabFurnish.[8] In 2019, the website Entrepreneur named it one of the top 10 startups from Mumbai, India.[9] Pepperfry has its own logistics arm which is India’s largest B2C delivery service.[10]

Pepperfry received its first seed funding of $5 million from Norwest Venture Partners India (NVP) in 2011. The investment firm invested an additional $8 million in 2013. Later in 2014, both NVP and Bertelsmann Indian Investments invested $15 million in the online startup. The company has so far raised a total of $189 million from investors including Goldman Sachs, Zodius Technology Fund and SSGA.[11]

This article "Pepperfry" is from Wikipedia. The list of its authors can be seen in its historical and/or the page Edithistory:Pepperfry. Articles copied from Draft Namespace on Wikipedia could be seen on the Draft Namespace of Wikipedia and not main one.