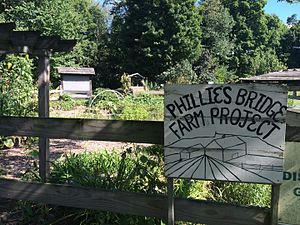 Phillies Bridge Farm is a non-profit farm located in Gardiner, New York. Its mission follows the model of community-supported agriculture, and the land itself is one of the oldest farms in New York state.[1] Its 65 acres of land were donated by owners Mary and Jim Ottaway in 2002 in order to create what would become the Phillies Bridge Farm Project, which also supports educational programs. The farm's mixed vegetable fields comprise approximately six acres, and the majority of the produce is sold to CSA shareholders.[2]

In 1677 the land was purchased from the Lenape by Huguenot settlers as they expanded from their original village settlements in New Paltz, New York. Purchased by Jan LeFevre, son of one of the twelve Huguenot families, the farm was in the LeFevre family for seven generations. Beginning to farm the land in 1742, Abraham and Andries LeFefvre used Rosendale lime to neutralize the acidic soil, planted clover to increase nitrogen levels, and employed crop rotation to increase their yields. These innovative techniques were revolutionary at the time.

The current farmhouse was constructed in 1850 on the stone foundation of the original 1745 house. The farmhouse and acreage would change hands several times before James Jr. and Mary Ottaway purchased the land in 1984. During their 12-year stay on the farm, the Ottaways were approached by Mohonk Consultations to create a demonstration farm that would focus on organic techniques and community education. With the vision and initiative of Dan Guenther, Helen Vukasin, Gayil Greene, and the Working Group on Family Farms, the farm was leased for five years from the Ottaways to create the Phillies Bridge Farm Project, which became a not-for-profit organization in 1999. The Ottaways were excited to see the success of the first not-for-profit Community Supported Agriculture farm in this area, farm-based education for schools, and a summer day camp. In 2002 the Ottaways donated the farm to the Phillies Bridge Farm Project.

The Phillies Bridge Farm Project demonstrates and promotes local agriculture that is ecologically sound, community oriented, and economically viable. The Farm Project achieves these goals through farm demonstrations, educational programs, apprenticeships, research, dissemination of information, distribution of food to those in need, and the operation of a working farm. [3]

Community Supported Agriculture (CSA) promotes a sustainable relationship between farms and their customers.

Share
Retrieved from "https://en.everybodywiki.com/index.php?title=Phillies_Bridge_Farm&oldid=944285"
Categories:
Hidden categories:
This page was last edited on 11 August 2020, at 09:58.
This page has been accessed 261 times.
Content is available under License CC BY-SA 3.0 unless otherwise noted.
Privacy policy
About EverybodyWiki Bios & Wiki
Disclaimers
Dark mode