The word "portal" in science fiction and fantasy generally refers to a technological or magical doorway that connects two distant locations separated by spacetime. It usually consists of two or more gateways, with an object entering one gateway leaving via the other instantaneously.

Places that are linked by a portal include a different spot in the same universe (in which case it might be an alternative for teleportation); a parallel world (inter-dimensional portal); the past or the future (time portal); and other planes of existence, such as heaven, hell or other afterworlds. A parallel world, such as the Wood between the Worlds in C. S. Lewis's Chronicles of Narnia, may exist solely to contain multiple portals, perhaps to every parallel world in existence.

Portals are similar to the cosmological concept of a wormhole, and some portals work using wormholes.

File:X3 Jumpgate.jpg
A "jumpgate" of the X Universe, part of a space-travel network.
File:PrimalRiftGate.jpg
A "Rift Gate" of the video game Primal used for transport between different realms of Oblivion

Portals are often used in science fiction to move protagonists into new territory. In video games, the concept is often used to allow the player to cover territory that has already been explored very quickly. A related book plot that is commonly used is the struggle to get to the opposite end of a new gate for the first time before it can be used.

In film and television, a portal is often portrayed using a ripple effect.

Other examples of portals include:

In his Hyperion Cantos novel series, Dan Simmons imagines a network of portals called "farcasters" which connect most human-inhabited planets. The form these portals take can vary, and they may be opaque, completely transparent, or semi-transparent. The completely transparent variety is very commonly used and effectively turns all connected places into one giant WorldWeb where distance becomes almost meaningless. Some of the more opulent occupants may have houses where each room is built on a different planet, and some rooms themselves may be partially built in several different physical locations but be joined by forecaster portals to form one complete room.

Stephen Robinett's book Stargate[8] (1976) revolves around the corporate side of building extra-dimensional and/or transportational stargates. In the novel, the stargate is given the name Jenson Gate, after the fictional company that builds it. Andre Norton's 1958 novel Star Gate may have been the first to use that term for such portals. The plot of Robert A. Heinlein's Tunnel in the Sky (1955) uses a portal. Raymond Jones' Man of Two Worlds (aka Renaissance) (1944) employs a portal that turns out to be a fraud.[9]

The Shi'ar, an extraterrestrial race introduced by Marvel Comics in 1976, also utilize a network of stargates. The Shi'ar utilizes both planet-based stargates (for personal travel) and enormous space-based versions (equivalent to the Ori supergate and used as portals for spaceships), though both are usually depicted without any physical structure to contain the wormhole. They are used for travel across great distances.

In the His Dark Materials trilogy, Philip Pullman has characters use the 'subtle knife' to carve a doorway from one world to another. CJ Cherryh's Morgaine series see the main characters traveling via 'gates' from world to world, closing them as they go.

Since the introduction of the stargate on the big screen, other authors have referenced the stargate device. Authors Lynn Picknett and Clive Prince also write of The Stargate Conspiracy: The Truth About Extraterrestrial Life and the Mysteries of Ancient Egypt. The book details an alternative theory links the term stargate with Egypt's past: Either the pyramid itself is a gateway to the stars (because of the shafts pointing to a star) or a construction of Heaven on Earth based on geographical location of the great and outlying pyramids (see: Orion). 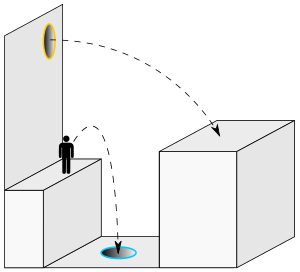 The basic concept of the portal as a link to another point in space, within the same universe. Going through the blue portal from a height preserves momentum when exiting the orange portal.

Stargate-like devices referred to as warp zones, are abundant in video games, as they can be used to split a game neatly into levels. The video games Primal and Turok the Dinosaur Hunter feature gateways allowing instantaneous travel between locations to this effect. In Metroid Prime 2: Echoes, a number of ring-shaped dimensional portals allow the main character to travel between Light and Dark versions of the planet Aether. In the game EVE Online, a large object called a "stargate" lets the player travel between solar systems, and in Homeworld 2, Hyperspace Gates serve as the centerpiece of one of the game's final missions, in which massive rings create wormholes capable of transporting matter great distances. In Super Mario 64 and its follow up, Super Mario Sunshine, various paintings and warp pipes lead to levels, all connected by a bigger level that houses these portals. Portals are used frequently throughout the Spyro (series), with each individual level, or world, separated by portals, allowing for loading screens which do not damage the game's immersion.

In Bioshock Infinite, Elizabeth is able to open up portals ("Tears") from another period of time either future or past, in an alternate dimension of their world.

In Command and Conquer: Generals, tunnel network serves as a portal for GLA faction. This is a building that can garrison some units. These units can exit from every tunnel network of their base without any relay. It is supposed that they travel underground with relatively high velocities, but they seem to be teleported.

In Command and Conquer 3: Tiberium Wars, the alien race Scrin uses portals to transport their armies onto and across the battlefields. The description of their Gravity Stabilizer states that the structure compensates for Earth's intense gravity and magnetic field, "allowing Alien spacecraft to execute short-range teleportation jumps directly to the battlefield".

Portals are common in MMORPGs. In RuneScape, portals can be used domestically. Players can install portal chambers in their houses that link to different cities in the world, allowing free transport to these places for both them and any visitors to their houses.[10]

In World of Warcraft, mages can summon portals that can teleport the mages and their group members to various cities.

In Heroes of the Storm, Warcraft hero called Medivh has an ability to summon portals as part of his ability kit, allowing allies to teleport between them in both directions.

In the augmented reality game Ingress portals are placed at sculptures, statues, and other public art, unique businesses, and historically and architecturally significant buildings and the like, but serve as nodes in the game mechanics (see graph theory) without any transportation function.

Portals are a pivotal theme and gameplay mechanic in Portal and its sequel, Portal 2, created by and developed by Valve. Portal introduces a portal-creating device, known as the Aperture Science Handheld Portal Device, as a central game mechanic which is used to solve puzzles and reach otherwise inaccessible destinations. The portals are depicted with few special visual effects; instead, they are shown as representations of the destination, bordered by blue or orange particle effects. In The Lab, the player can use hand-mounted portals to travel to various "pocket universes".

In Half-Life and its expansions, which are set in the same fictional universe as the Portal franchise, portals appear as glowing red-green balls of energy which instantly teleport the user to an inversely colored exit point, although unlike the portals seen in Portal, the destination of these portals cannot be seen before crossing into them. A different kind of portal with a purple surface appears at the end of Half-Life: Opposing Force, which serves to transport the final boss of the game, the Gene Worm, to Earth. In Half-Life 2, it is revealed that the Resonance Cascade as seen in Half-Life had created a dimensional rift that allowed a vicious alien race known as the Combine to invade and subjugate Earth. Another side effect of the Resonance Cascade was the creation of "portal storms", destructive waves of energy that spread outwards in a storm-like manner while opening a multitude of portals to other dimensions, which ravaged the landscape and transported countless alien creatures to Earth. In Half-Life 2: Episode One, the Combine attempt to use the destruction of the Citadel in City 17 to open a superportal to the Combine Overworld in order to summon reinforcements to battle the human Resistance movement, but during the events of Half-Life 2: Episode Two, the Resistance successfully destroy the superportal before it can be completed. Like the portals in Portal, the Combine superportal was transparent, so spires on the Combine Overworld could be glimpsed on the other side.

In the game Minecraft created by Markus Persson and Jens Bergensten, it is possible to build a portal to an alternate hell-like dimension called "The Nether".[11][12] It is accessed by making a frame of obsidian blocks, with a 3×2 rectangle in the centre, then setting it on fire using any object that can make fire. When lit, the frame will be filled with blocks resembling whirlpools. A player standing in the portal long enough will be transported to "The Nether," which consists of caves, lava, fortresses, mushrooms, neutral zombie pigmen, magma-slime creatures, tall black "wither skeletons", and fire shooting "ghasts" and "blazes". Another kind of portal in Minecraft is the End Portal, which is a portal found 128 (only 3 in the console version) times in "Strongholds" throughout the world. The players use "Eyes of Ender" to find the End Portal, and places one Eye of Ender in each frame-block (if not already there). When completed and entered, the player will go the "End", filled with mobs called "Enderman". The only way out of the End is to either get killed or kill the Ender Dragon, which opens a portal back to the Overworld.

Retrieved from "https://en.everybodywiki.com/index.php?title=Portals_in_fiction&oldid=945707"
Categories:
Hidden categories:
This page was last edited on 11 August 2020, at 21:45.
This page has been accessed 406 times.
Content is available under License CC BY-SA 3.0 unless otherwise noted.
Privacy policy
About EverybodyWiki Bios & Wiki
Disclaimers