The Purdue Polytechnic Institute is one of ten academic colleges, of Purdue University. The college offers bachelor's, master’s and Ph.D. degrees in a wide range of disciplines. With over 30,000 living alumni, it is one of the largest technology schools in the United States and currently tied for first place in rankings. 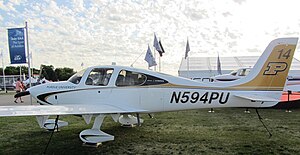 In 2015, the Board of Trustees approved its current name in support of the college’s transformation and as part of President Mitch Daniels’ Purdue Moves initiative.[6][7]

Retrieved from "https://en.everybodywiki.com/index.php?title=Purdue_Polytechnic_Institute&oldid=1076559"
Categories:
Hidden categories:
This page was last edited on 1 November 2020, at 05:54.
This page has been accessed 14 times.
Content is available under License CC BY-SA 3.0 unless otherwise noted.
Privacy policy
About EverybodyWiki Bios & Wiki
Disclaimers
Mobile view