Qua is a three-dimensional (3D) abstract strategy game for three players. It is an extension of the two-dimensional, two player game called Gale, marketed as Bridg-It[1]. Qua is played on a 3D game board grid composed of N3 cells in the shape of a cube, where N is typically odd and equal to the number of cells along each edge of the game board. It is the first connection game that is fully 3D (no fully 3D connection games are listed in Cameron Browne's definitive book on the subject)[2].

The objective of Qua is to be the first player to complete a connected path of cells containing their game play pieces between their two opposite faces of the game board cube.

The 3D game board does not start out empty. Some of the cells in the game board are initially filled-in with one of three game play pieces, called qua. The three qua game play pieces--one for each player--are distinguished from each other by shape and color. 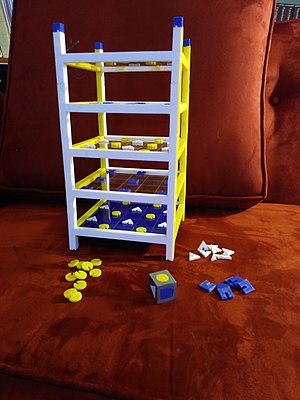 Share
Retrieved from "https://en.everybodywiki.com/index.php?title=Qua_(board_game)&oldid=948115"
Categories:
This page was last edited on 12 August 2020, at 17:30.
Content is available under License CC BY-SA 3.0 unless otherwise noted.
This page has been accessed 147 times.
Privacy policy
About EverybodyWiki Bios & Wiki
Disclaimers