Rampa São Januário is a street connector in the Plateau of Praia, in the very center of Praia, Santiago island, Cape Verde, it is one of three street connecting the Plateau with other parts of the city and is one of the major streets of the city.. It runs with two sharp curves and the speed limit is about 20 km/h. Its length is 260 meters long It is the starting point of the main highway EN1-ST03 starting south of the square (not mainly today and is not put on signs), the main traffic flow is bypassed today. 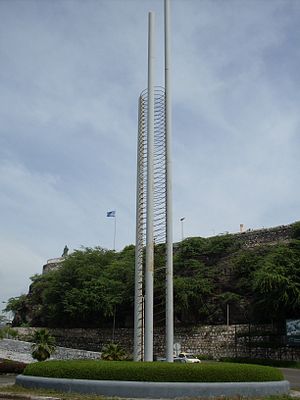 Monument for Aids on Disaster with the Ramp and the circle intersecting with Av. Combatentes da Liberdade da Patria

The ramp begins at Rua Banco Antiga (then Rua Banco Ultramarino), the building was located to the northeast, now it is home of Banco Comercial do Atlântico while the Bank of Cape Verde (Banco Ultramarino until 1975) is northwest of the main square. West is Casa O Cidadão, the western buildings up to the mid 20th century was an arsenal. The street descends downhill from the starting point and where a man-made cut is made in the former gate, then it curves left and enters a very steep hill, forested, the first portion has a stone fence. It curves slightly left at a 20 degree angle below the Monument to Diogo Gomes and then it curves right and intersects at a roundabout at Avenida Combatentes da Liberdade da Patria, in the middle is the Monument For the Aid on Disasters.

The street (then as a road) was constructed as early as the early 15th century and was a pathway. Praia (then Praya de Santa Maria) was founded in 1612 on a previous settlement and its streets became predominantly to a grid plan. From the 18th century, it was not used for carriages as a gate was built at the entrance which protected the city especially from pirate raids. nearby was the city mole. In the middle of the modern street was a Port office and the roads to Cidade Velha (now shortened to west of Várzea) and the Plateau (now Avenida Machado Santos) Around the 1950s, the gate was demolished and it became a used road.

A part of the main traffic carrying the south of the city with the north and the port was fully bypassed in the 1980s with Avenida Cidade da Lisboa in the west. In 2003, Avenida Combatentes da Liberdade da Patria opened and completely moved the main traffic flow to that avenue carrying with the south of the city and the north and the port along with the north of the island on that arterial, it even shortened the street to the roundabout. The street ended at Rua do Porto (or Avenida Marginal) as it was known and modern day Rua da Várzea (then Caminho de Praia-Cidade Velha-Porto Mosquito) and was 370 meters long, it ran north of Praia da Gamboa, that stretch is now one way traffic westward and is also another ramp. That portion was in the neighborhood of Plateau, the boundary is marked north of the sidewalk and south of the rotary to the Harbor.

At the upper portion, it offers a view of the south of the city including Várzea and its stadium, Gamboa, Ilhéu de Santa Maria and Prainha-Temerosa. It offers less panoramic views downhill heading southeast, where it offers a view of Praia Harbor and its port and a part of Achada Grande.

Numerous transit lines passes through the avenue often or sometimes, they include:[1]

Share
Retrieved from "https://en.everybodywiki.com/index.php?title=Rampa_São_Januário&oldid=949407"
Categories:
This page was last edited on 13 August 2020, at 08:26.
Content is available under License CC BY-SA 3.0 unless otherwise noted.
This page has been accessed 310 times.
Privacy policy
About EverybodyWiki Bios & Wiki
Disclaimers