Rua Patrice Lumumba is a one way street in the Plateau of Praia, in the very center of Praia, Santiago island, Cape Verde. It runs east to west and the traffic direction is only west. It is 130 meters long and its elevation above sea level ranges from 34 meters in the east to 30 meters in the west. Address numbers are ordered westward. 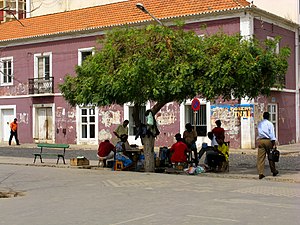 Rua Patrice Lumumba in front of Alexandre Albuquerque (or 12 de Setembro) Square in 2008, Rua 5 de Julho is now pedestrianized since 2009

The street is named after the liberator of Congo (Léopoldville) (later Congo (Kinshasa)), now as the Democratic Republic of the Congo) in the mainland of Africa Patrice Lumumba and (now Democratic) Congo's first Prime Minister. It was once called Rua Saldanha Lobo after the colonial governor Joaquim Salema Saldanha Lobo who held office from November 25, 1768 to 1777.

The street was constructed as early as the 18th century.

The street begins at Avenida Andrade Corvo, its second intersection is with Rua Serpa Pinto, the rest of the street is bounded with Albuquerque Square to the south, the third intersection is with Rua 5 de Julho which has been pedestrianized since 2009 and the last is with Avenida Amílcar Cabral with a stoplight, one of the first installed in the country. The western portion is a no parking zone

Buildings across the street include Banco Interatlântico,[1] LG Cabo Verde's offices and Mundilar shop, all located on Avenida Amílcar Cabral.

Another street named Patrice Lumumba in Cape Verde is in the Monte Sossego neighborhood in Mindelo in São Vicente. Also there is a street in Santa Maria on the island of Sal.

Share
Retrieved from "https://en.everybodywiki.com/index.php?title=Rua_Patrice_Lumumba_(Praia)&oldid=953873"
Categories:
Hidden category:
This page was last edited on 15 August 2020, at 03:57.
Content is available under License CC BY-SA 3.0 unless otherwise noted.
This page has been accessed 425 times.
Privacy policy
About EverybodyWiki Bios & Wiki
Disclaimers