Educated at Mayo College, Ajmer 1943/1953 and later at Maharaja's College[disambiguation needed] (achieving a Doctor's degree in Homeopathy in 1978); during this period of study he pursued N.C.C. as an extra curriculum activity, in which for two consecutive years he won The Bardhwan Shield for Shooting for the state of Rajasthan and also represented the State in mountaineering expedition under the world famous Tenzing Norgay at Darjeeling

He served as a Professor of radio and electronics at Mayo College, Ajmer and later at the University of Rajasthan in the Department of Physics; in 1971 he started the exclusive showroom of Raymond company at Jaipur and served as the General Manager; he applied for the Radio Telegraph Station Operators Licence which enabled him to help familys during the Bhuj ( Gujrat ) earthquakes by radio communication, he was one of India's most active HAM's till his death.

Married Rani Sugan Kunwar, (19th November 1934, died 26th April 2014), she was educated at Maharani Gayatri Devi Girl's School ( MGD ) and at Sanskrit College, earning a Bachelors Degree in Sanskrit, daughter of Col. Thakur Keshri Singh of Kanota, and had issue, one son and one daughter. 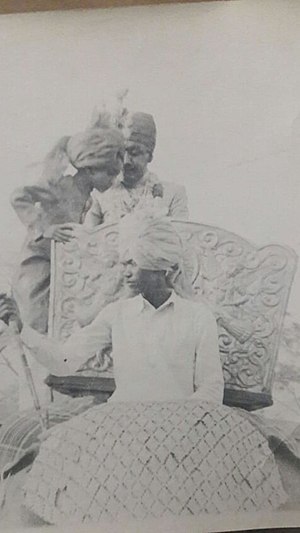 Rawat Harsh Vardhan Singh Nindar, educated at Saint Xavier's School, Jaipur and at Mayo college, Ajmer, then graduated from the University of Rajasthan with a Masters Degree in Business Administration; he worked as the Casting director for various English movies shot at Jaipur; presently engaged in providing accommodation to women for higher education in Jaipur; married Rani Dr. Anju Chandra Kumari, she was educated at Saint Mary's Sophia School, Ajmer as well as in Jodhpur where she served as the head girl, she mastered in English literature from the University of Rajasthan and has currently been awarded a Doctorate in the Department of Arts of Social Sciences by the IIS University for her work on the poetry of Robert Frost; daughter of Thakur Sahab Bhism Chandra Jadonji of Amargadh

Bai-ji-laal Rajshree Kumari, educated at Maharani Gayatri Devi Girl's School, Jaipur and at the University of Rajasthan, earning her Bachelors and Masters degress in English Literature; she is presently (2014) engaged in creating useful work for women and children in rural areas

Retrieved from "https://en.everybodywiki.com/index.php?title=Rawat_Hari_Singh_Nindar&oldid=745989"
Categories:
Hidden categories:
This page was last edited on 30 May 2020, at 23:48.
This page has been accessed 373 times.
Content is available under License CC BY-SA 3.0 unless otherwise noted.
Privacy policy
About EverybodyWiki Bios & Wiki
Disclaimers