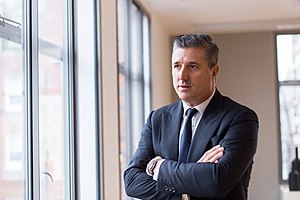 Robert Gros (born 4 October 1967) is a British innovator and businessman. He is the founder and CEO of Chemical Intelligence Limited & Sanitas Healthcare. He is most famous for his work in the licensing, research and development of antimicrobial technology.

Gros was born in Shoreham-by-sea, West Sussex, and grew up in Angmering-on-sea before moving to London. He attended the Angmering School in West Sussex.

After leaving school, Gros got his first job as a Computer Programmer at Capgemini (formerly Hoskyns) in 1988 working on IBM AS/400’s mid-range machines coding in RPG/400® computer language.

Six years later, he created his first company London City Press Limited, a London based printing company that provided design and print services for blue chip companies such as British Airways and many of the UK’s leading publishers. From here he founded a media services company, Sheetfed Holdings Limited, which began working with blue chip companies all across Europe including UEFA, Harrods, Arsenal, Euromoney, Kaplan and Etihad Airways. The company provided the marketing services for the UEFA EURO 2008 in Poland & Ukraine and EURO 2012 in Austria & Switzerland covering both the Opening Ceremonies and the Finals.

In 2006, Gros jointly founded Content Entertainment, where he worked as a CEO. The company bought and sold movies for the purpose of promotions. This included the Hideous Kinky film starring Kate Winslet where a total of 1.8m copies were reproduced and sold as cover mounts for the Sunday Times Newspaper. Despite the business being lucrative, Gros moved on deciding to instead focus on other ventures.

Gros started his first business in healthcare in 2006, PatientPak Limited.[1] It released the first consumer Superbug Kit, Patientpak[2] aimed at people going into hospital to help protect themselves from healthcare acquired infections (HAI’s). Available in high street outlets such as Boots, Tesco and Mothercare. Patientpak was mentioned by the House of Commons, Health Committee, in their publication Patient Safety on the 30th October 2008.

In 2009, the onset of the Swine Flu pandemic inspired Patientpak Limited to launch a product called Flupak[3] which was distributed throughout the UK via Lloyds Pharmacy. The formulation used was proven effective against H1N1 and the product sold out immediately. Gros also distributed additional products to Lloyds Pharmacy such as antibacterial wipes, sprays and hand gels.

In 2009 Gros was recruited by Evexar Medical Limited (a subsidiary company of UCLB) as a temporary advisor in order to specifically introduce graduated compression socks[4] to both Arsenal Football Club and the England National Football Team. The socks were subsequently adopted as part of the kit.

It was during this time that the inspiration came, to develop the antimicrobial technology. During this period, Gros noticed the WHO Guidelines on Hand Hygiene in Healthcare. It was then he realised no one had managed to develop a clinically viable technology to help reduce the transmission of harmful bacteria on the surface of medical examination gloves to patients or other surfaces. Not being a scientist himself, Gros quickly formed a group of scientists who could help him do just that.

Gros formed Chemical intelligence Limited in 2012, at the Victoria Business Park in Netherfield, Nottingham.[5] The purpose of the company was for research and development for this antimicrobial technology to be used in high volume disposable consumable medical devices.[6] Working with Professor Richard James, from the University of Nottingham’s centre for Biomolecular Sciences, and eventually Dr Paul Wight a Manchester based independent Scientist - the team went on to create the world’s first non-leaching antimicrobial bug-killing molecule that could be chemically bonded onto the surface of a medical examination glove.[7][8][9]

The company then attracted the backing and agreed a license with a Malaysian based glove manufacturer, Hartalega Holdings Berhad - the world biggest manufacturer of nitrile examination gloves.[10][11] The technology[12] – for which Rob also has a patent granted in the US[13] - is now being prepared for launch, with millions of dollars of funding already being channelled into it from his backers and various stages of testing completed.[14][15][16]

The antimicrobial nitrile examination gloves are expected to be used by hospitals and other users around the world, such as residential care homes because of their potential to help reduce the transmission of harmful infections between a healthcare worker, patient and near patient touch surfaces.[17] They were released at the European Launch on the 31st May 2018 at the Royal Society of Medicine in London.[18][19]

Retrieved from "https://en.everybodywiki.com/index.php?title=Robert_Gros&oldid=952412"
Categories:
Hidden category:
This page was last edited on 14 August 2020, at 11:23.
This page has been accessed 852 times.
Content is available under License CC BY-SA 3.0 unless otherwise noted.
Privacy policy
About EverybodyWiki Bios & Wiki
Disclaimers
Mobile view