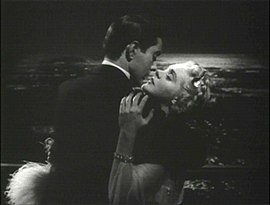 Romance films or romance movies are romantic love stories recorded in visual media for broadcast in theaters and on TV that focus on passion, emotion, and the affectionate romantic involvement of the main characters and the journey that their love takes them through dating, courtship or marriage. Romance films make the romantic love story or the search for strong and pure love and romance the main plot focus. Occasionally, romance lovers face obstacles such as finances, physical illness, various forms of discrimination, psychological restraints or family that threaten to break their union of love. As in all quite strong, deep, and close romantic relationships, tensions of day-to-day life, temptations (of infidelity), and differences in compatibility enter into the plots of romantic films.[1]

Romantic films often explore the essential themes of love at first sight, young with older love, unrequited romantic love, obsessive love, sentimental love, spiritual love, forbidden love/romance, platonic love, sexual and passionate love, sacrificial love, explosive and destructive love, and tragic love. Romantic films serve as great escapes and fantasies for viewers, especially if the two people finally overcome their difficulties, declare their love, and experience life "happily ever after", implied by a reunion and final kiss. In romantic television series, the development of such romantic relationships may play out over many episodes and/or different characters may become intertwined in different romantic arcs.

Screenwriter and scholar Eric R. Williams identifies Romance Films as one of eleven super-genres in his screenwriters’ taxonomy, claiming that all feature length narrative films can be classified by these super-genres. The other ten super-genres are Action, Crime, Fantasy, Horror, Science Fiction, Slice of Life, Sports, Thriller, War and Western.[2] 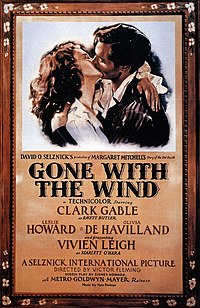 Also known as Epic romance, this is a romantic story with a historical period setting, normally with a turbulent backdrop of war, revolution or tragedy. This includes films such as Titanic, Gone with the Wind, Reds and Doctor Zhivago.

Romantic dramas usually revolve around an obstacle which prevents deep and true love between two people. Music is often employed to indicate the emotional mood, creating an atmosphere of greater insulation for the couple. The conclusion of a romantic drama typically does not indicate whether a final romantic union between the two main characters will occur. Some examples of romantic drama films are Mouna Ragam, Titanic, The Bridges of Madison County, The English Patient, Sommersby, Casablanca, Coming Home, Jungle Fever, Restless, Memoirs of a Geisha, Last Tango in Paris, Water for Elephants, 5 Centimeters per Second, Love Story, Man's Way with Women, Kabhi Alvida Naa Kehna, Veer-Zaara and Dilwale Dulhania Le Jayenge. Same-sex romantic dramas, which tackle LGBT issues include Brokeback Mountain and Call Me by Your Name.[3]

Chick flick is a term often associated with romance films as many are targeted to a female audience.[4][5] Although many romance films may be targeted at women, this is not a defining characteristic of a romance film and a chick flick does not necessarily have a romance as a central theme, revolve around the romantic involvement of characters or even contain a romantic relationship. As such, the terms cannot be used interchangeably. Films of this genre include Dirty Dancing, The Notebook, Dear John, A Walk to Remember, and Romeo + Juliet.

A bromantic comedy is a comedy film genre that takes the formula of the typical “romantic comedy” but focuses on close male friendships.[6] The word “bromance” is a close but non-sexual relationship between two or more men.[7] Notable bromantic comedy films are Shaun of the Dead, Superbad, I Love You, Man, and Step Brothers.[8] Popular and common elements or themes of bromantic comedies include; male bonding, bromance, and conflicts with heterosexuality bonding, with the addition of humour.[9] Aspects of bromantic comedies, including male camaraderie, were first seen in Barry Levinson's 1982 film Diner.[10]

Romantic comedies are films with light-hearted, humorous plotlines, centered on romantic ideals such as that true love is able to surmount most obstacles. Humour in such films tends to be of a verbal, low-key variety or situational, as opposed to slapstick.[11] Films within this genre include Four Weddings and a Funeral, Love Actually, Moonstruck, As Good as It Gets, Something's Gotta Give, It Happened One Night, When Harry Met Sally..., Annie Hall, and The Apartment.

Romantic action is a film that blend romance and action. Examples include Killers, Knight and Day, Mr. & Mrs. Smith, This Means War and The Bounty Hunter.

Romantic thriller is a genre of film which has a storyline combining elements of the romance film and the thriller genre. Some examples of romantic thriller films are The Adjustment Bureau, The Phantom of the Opera, The Tourist, The Bodyguard, Unfaithful, and Wicker Park.[12]

Gothic romance is a film genre which includes gothic elements and affirms feminine experiences, perceptions and interpretations of their “fear, anger, and distrust of patriarchal order”.[13] A key feature of gothic romance films is the “Bluebeard motif”. This typically refers to secrets or forbidden rooms or areas in a house, which represent female protagonists’ repressions. This common characteristic is based on a variation of the Bluebeard folktale of a wealthy man who forbids his new wife from entering his castle's underground chamber, to which she finds the corpses of his many former wives. Some examples of gothic romance films include Crimson Peak, Rebecca, Suspicion and Gaslight.

Romantic fantasies describe fantasy stories using many of the elements and conventions of the romance genre. Some examples include Edward Scissorhands, Cinderella and The Shape of Water.[14]

Paranormal romance is a popular genre of film which features romantic relationships between humans and supernatural creatures.[15] Popular tropes include vampirism, time-travel, ghosts and psychic or telekinetic abilities - i.e. things that cannot be explained by science.[16] The genre originated in literature and moved on to the screen in the early 2000s, following the success of the Twilight Saga adaptations from Stephanie Meyer’s books.[17] By 2007–8, film studios were producing various paranormal romance films, many adapted from novels.[17]  Examples of paranormal romance films include Warm Bodies, The Twilight Saga, Emerald Green, Vampire Academy and I Am Dragon.[18]

Retrieved from "https://en.everybodywiki.com/index.php?title=Romance_film&oldid=1122307"
Categories:
Hidden categories:
This page was last edited on 15 November 2020, at 01:08.
This page has been accessed 197 times.
Content is available under License CC BY-SA 3.0 unless otherwise noted.
Privacy policy
About EverybodyWiki Bios & Wiki
Disclaimers