Rua Argelia is a street in the district of Alto Mira in northcentral Mindelo, São Vicente island, Cape Verde. The street runs parallel between Ruas 5 de Julho and Luis Terry. It is 355 meters long and its elevation above sea level ranges from 11 meters in the south to 18 meters in the north as the street runs a bit uphill. Address numbers are ordered northward as to that part of the city. 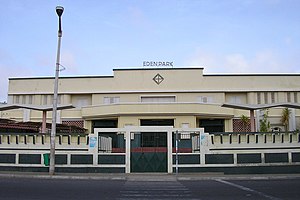 The street is named after Algeria.

The street was constructed in 1891 and was completed in 1895 when Praça Nova (now also as Praça Amílcar Cabral) was finished. The street begins at the intersection with Rua Patrice Lumumba, for one block, it runs near the square,[1] the island's second most important square, it heads up to Travessa da Angola. It intersect three unnamed streets, the first two intersecting to the east and west, and finishes at Avenida Doutor Alberto Leite and another street. Parts of the street are lined with trees mostly towards the west.

Hotel Porto Grande is in the east side, nearby the hotel in a one story section below balcony are a few shops as well as Banco Comercial do Atlântico (BCA) branch for Alto Mira, further up is the archipelago's first cinema Eden Park, which was opened in 1923.[2] Next is two buildings before Kira's Hotel. West is bounded by Centro Nacional de Artesanato to the left which is not addressed to this street. Up a block is one of the buildings of the Mindelo's Campus of Jean Piaget University.[3] Most of the architecture were first built as late colonial. Some buildings have modern architecture.

Share
Retrieved from "https://en.everybodywiki.com/index.php?title=Rua_Argelia&oldid=953871"
Categories:
Hidden category:
This page was last edited on 15 August 2020, at 03:56.
Content is available under License CC BY-SA 3.0 unless otherwise noted.
This page has been accessed 473 times.
Privacy policy
About EverybodyWiki Bios & Wiki
Disclaimers