Sabita Devi (1914–1965)[1] was a Hindi film actress in Indian cinema. She is stated to be one of the "prominent" leading ladies of the "pioneering era" of Indian cinema along with Mehtab, Bibbo, Durga Khote, Gohar, Devika Rani and Seeta Devi.[2] A Jewess by birth,[3] she changed her name to find acceptability in Hindi cinema like the other Anglo-Indian and Jewish actresses of her time, Sulochana (Ruby Myers), Seeta Devi (Renee Smith), Madhuri (Beryl Claessen), and Manorama (Erin Daniels).[4][5] After initially working with British Dominion Films Ltd., Calcutta, she shifted to Bombay and performed mainly in films produced by Sagar Movietone with her co-star in most films being Motilal. Some of the popular films with Motilal were Dr. Madhurika (1935) and Kulvadhu (1937) directed by Sarvottam Badami.[6] Their first film together was Shaher Ka Jadoo (1934), which was also Motilal's debut film,[7] and then Lagna Bandhan (1936) both directed by Kaliprasad Ghosh.[8] She acted in Silver King (1935) with Motilal. It was an action film directed by C. M. Luhar, which became a "huge success".[citation needed]

Counted as one of the top three female artistes of her time, in 1938 she was the third highest paid actress after Sulochana (Ruby Myers) and Gohar, drawing a salary of Rs. 3000 per month. "Classic writers like K. M. Munshi and Ramanlal Vasantlal" were commissioned to write stories for her films, with elaborate sets and "special rehearsals" provided along with an overwhelming "pre-release publicity".[3] One of the top directors of the time she worked with doing social genre films was Sarvottam Badami.[9] She formed her own production company, Sudama Pictures, in collaboration with Sarvottam Badami along with the assistance of Ranjit Studios.[10] From 1935–1943 Sabita acted in fifteen films, all directed by Badami. Some of the comedy films she acted in like Aap Ki Marzi (1939) and Ladies Only (1939), turned out to be big box office successes.[11]

Sabita Devi was born Iris Gasper into a Jewish family. Her father Percy Osborne Gasper, died in November 1938, in Bombay.[12] Her mother remained as her manager-cum-companion. Sabita had two siblings, a brother and a sister.[13]

Bibbo and Sabita Devi in Ladies Only

Her first film Kamaner Aagun (Flames Of The Flesh) was produced by British Dominion Films Ltd., Calcutta, in 1930. It was directed by Dinesh Ranjan Das and co-starred Dhirendranath Ganguly, Debaki Bose, Ramola Devi and Radharani.[8] The film was a semi-historical version of the Queen of Chittor, Rani Padmini, committing jauhar to evade the enemy forces.[14]

In 1933, she was cast in a religious film, Radha Krishna, directed by Priyanath N. Ganguly and Tulsi Lahiri. Her co-stars were Dhiraj Bhattacharya, Indubala, Amar Choudhary and Kamala Jharia. An East India Film Company production, it had music by Sunderdas Bhatia.[18]

Shaher Ka Jadoo in 1934 was a debut acting film for Motilal and was written and directed by Kali Prasad Ghose.[19] The main stars in this social were Sabita, Kumar, Sitara Devi, K. C. Dey, Miss Gulzar and Tarabai. The film was produced by Sagar Movietone. She then acted in Ezra Mir's Farzande Hind also called Phantom of the Hills, an action drama film. The film starred Sabita with Jal Merchant, Yakub, Nyampally. Produced by Sagar, the music was composed by S. P. Rane.[20]

Grihalakshmi (Educated Wife) (1934) was an early woman-centric film and was a remake of the earlier silent film Bhaneli Bhamini (1927). Directed by Sarvottam Badami,[21] it was produced by Sagar and had music by S. P. Rane. Her co-stars were Jal Merchant, Yakub, K. C. Dey and Lalita Devulkar. Her last film in 1934 was Chandra Gupta directed by A. R. Kardar and starring Gul Hamid, Nazir, Mazhar Khan and Dhiraj Bhattacharya. Produced by East India Film Company, it had music by K. C. Dey. 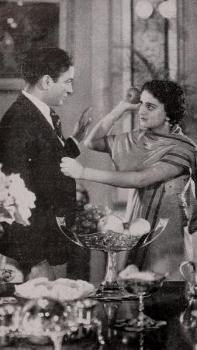 From 1935-1943 she acted in over fifteen films, all directed by Sarvottam Badami, with the exception of Silver King, cited as one of the best stunt films of its time. It was directed by C. M. Luhar and starred Motilal with music by Pransukh Nayak. Badami and Sabita left Sagar Movietone to form Sudama Pictures in association with Ranjit Pictures.[10]

In 1935, Sabita acted in Badami's film, based on K. M. Munshi's story, Vengeance Is Mine (Ver Nu Vasulat). It co-starred Kumar, Yakub, Sitara Devi, and Mehboob Khan in a small role. Music director was S. P. Rane. In Dr. Madhurika she played an emancipated doctor opposite Motilal, with music by Pransukh Nayak and Ashok Ghosh. Some of the other successful films in the 1930s include Grama Kanya (1936), Kokila (1937) written by Ramanlal Vasantlal Desai, Kulvadhu (1937), Teen Sau Din Ke Baad also called 300 Days & After (1939) a modern romantic drama in which Sabita's acting received a positive critique from Baburao Patel as an "artiste of great calibre", in a "light-hearted a portrayal of her difficult role" and that "she easily takes away all the laurels for acting".[22] Ladies Only was a 1939 comedy film directed by Badami and starred Bibbo, Prabha Devi and Sabita playing three girls from different states of India, all in love with the hero played by Surendra. This was the last comedy film Badami made for Sagar Movietone, before he left them after this film to form Sudama Pictures.[23]

Sabita acted in the next comedy film directed by Badami, this time for Sudama pictures. Aap Ki Marzi (1939) was based on the MGM produced, Edward Buzzell directed film Paradise for Three (1938).[24] The music direction was by Gyan Dutt and starred Motilal as the crossword puzzle winner who falls in love with Sabita's character.

Sajani (1940) was one of the first "socially relevant film(s)" that Badami made for Sudama pictures. It starred Sabita with Prithviraj Kapoor and Snehprabha Pradhan. Chingari (1940) a romantic melodrama from Sudama Productions with director Sarvottam Badami and co-starred Prithviraj Kapoor. The film was highly recommended by Baburao Patel editor of Filmindia as a contender for 1940 Award of the Film Journalists' Association Of India.[25]

Bambai Ki Sair also called Holiday in Bombay (1941) was directed by Badami for Sudama Productions and co-starred Shobhana Samarth and Arun. The film was reportedly "creating new box-office records at the Imperial Cinema when it was released".[26]

In 1947, she starred in Sarai Ke Bahar also known as Inquilab which is stated to be the only film directed by the famous Urdu writer Krishan Chander. It had lyrics by Niaz Haider and Vishwamitter Adil, with music by D. C. Dutt.[27]