Sitara Devi (8 November 1920 – 25 November 2014) was an eminent Indian dancer of the classical Kathak style of dancing, a singer, and an actress. She was the recipient of several awards and accolades, and performed at several prestigious venues in India and abroad, including at the Royal Albert Hall, London (1967) and at the Carnegie Hall, New York (1976).[2]

Sitara Devi was born in Kolkata (then Calcutta) on 8 November 1920, which in that year coincided with the festival of Dhanteras, the eve of the Indian festival of Dipavali.[3] She was therefore named Dhanalakshmi, in honour of the goddess of good fortune who is worshiped especially on that day.[1][4]

Dhanalakshmi's paternal family was of Brahmin heritage and hailed originally from Varanasi, but had settled in Kolkata since many years. Her father, Sukhadev Maharaj, was a Brahmin gentleman and a Vaishanavite scholar of Sanskrit, but he earned his livelihood by teaching and performing the Kathak dance form. Her mother was Matsya Kumari, whose family belonged to the community of performing artists, and who claimed a relationship with the royal family of Nepal. Sukhadev Maharaj, while serving in the royal court of Nepal, had developed a passion for classical dance and done an in-depth study of Bharata Natyam and the Natya Shastra; he also practised and performed Kathak dancing in which he excelled. Kathak became his source of livelihood, as also a passion; this was fostered by his marriage to a woman with background in performing arts. The passion for dance was something he passed on to his daughters, Alaknanda, Tara, and Dhanno; and to his sons, Chaube and Pande. She could return to live with her parents' only when she was eight.

She had met Rabindranath Tagore, and was encouraged by him to revive the lost Indian performing arts (like kathak), after that he died, and ensure elevation of them to a dignified status. Sukhadev Maharaj decided to realise this goal by contributing to reforming the kathak style of dancing. At that time, kathak was being performed by nautch girls or boys, and girls of decent families were not expected to learn this style of dancing. He decided to give religious input to the content, which was quite different from the content used by the nautch girls. Moreover, he decided to teach this form of dancing to his daughters and sons. Elders of his community were scandalised, and Sukhadev Maharaj was virtually excommunicated.[citation needed]

Maharaj and his family members had to face the ire of the community members, and his daughters were called prostitutes. This did not deter him in his determination. Devi, recalling those moments, said: "My father used to say that when Radha could have danced for Krishna why not our girls? Why should men appropriate the right to dance?"[citation needed] Maharaj changed his residence, and came to another area of Varanasi. He established a school to teach children including his own daughters and sons dancing. He admitted children of prostitutes who came to the school to learn dancing. Once, the law enforcement authorities came to enquire about the affairs of the school, and Maharaj presented a performance based on the tales of the Mahabharata. She had been watching her sister, twenty years senior to her, learning dance, and she had managed to learn dancing well just by observation and self-practice.[citation needed]

Like the tradition of the time, Devi was to be married when she was a small girl of eight, and her child bridegroom's family wanted to solemnise the marriage. However, she resisted, and wanted to be in a school. At her insistence, the marriage did not take place, and she was admitted into the Kamachhagarh High School. While at this school, a dance drama based on the mythological story of Savitri and Satyavan was to be enacted in a cultural program to be conducted by the students of the school. The school was searching amongst the students for someone to do a dance sequence embedded in the dance drama. Dhanno prevailed upon her teacher by showing her an impromptu dance performance. The performance clinched the role for her and she was also assigned the task to teach the dance to her co-performers in the sequence. After the dance drama, a local newspaper named the Aaj reported about the cultural program emphasising that a little girl name Dhanno had enchanted the audience by her dance performance. Her father saw the news, and this changed his perception about his girl with the "twisted mouth". Dhanno was re-christened as Sitara, and she was entrusted into the charge of her elder sister, Tara for imparting her dancing lessons. Incidentally, Tara is the mother of famous kathak dancer, Gopi Krishna.[5]

By the time Devi had turned ten, she was giving solo performances, mostly during the fifteen-minute recess during movies in a cinema of her father's friend. Her commitment to learning dance left her with very little time, and she did not continue her schooling. By the time she was eleven, her family shifted to Bombay (now called Mumbai). Soon after reaching Bombay, Devi gave a kathak performance in Atiya Begum Palace before a select audience, which included Rabindranath Tagore, Sarojini Naidu and Sir Cowasji Jehangir. She impressed Tagore who wanted her to give a special performance in Tata Palace of the Tata Group. There the eleven-year-old dancing damsel studied kathak, with all its nuances, for three hours. Tagore called her to felicitate her in the traditional Indian style of giving her a shawl and a gift of Rs. 50 as a token of her appreciation. Recalling those moments, Devi once said: "But as I thrust out my hand to receive gifts, I remember my father nudged me and whispered in my ear: ‘Don’t take only the gifts! He is a great man: ask for his blessings, girl!’ Obediently, I asked Gurudev to bless me that I would become a great dancer some day."[citation needed]

Her debut was at Jehangir Hall (Mumbai), then the centre of metro’s cultural life. When she was a twelve-year-old girl, Devi was recruited by Niranjan Sharma, a filmmaker and a dance director, and she gave dance sequences in some Hindi movies including her debut in Usha Haran 1940, Nagina 1951, Roti, Vatan 1938, Anjali 1957 (directed by Chetan Anand, brother of Dev Anand). In Mother India 1957, she performed a Holi dance dressed as a boy, and this was her last dance in any movie. She stopped performing dances in movies, as they were adversely affecting her study in the classical dance, kathak.[citation needed]

Rabindranath Tagore described her as Nritya Samragni ( नृत्य सम्राज्ञी ), meaning the empress of dance, after watching her performance when she was just 16 years old.[6] The epithet continues, and she is still described as the Kathak queen.[7]

Sitara Devi married three times. Her first husband was the actor Nazir Ahmed Khan (not to be confused with Nasir Khan who was Nazir's son-in-law). The age difference between them was sixteen years, and Nazir's first wife, Sikandara Begum, was always present. There was also a profound difference of religion, Khan being a Muslim and Sitara Devi a Hindu. At that time (before 1956), it was not possible for people belonging to different religions to marry and not possible for husband and wife to belong to different religions. Sitara converted to Islam in order to enter into this marriage. This marriage was both short-lived and childless, and they were soon divorced.

Sitara Devi's second marriage was to film-maker K. Asif, who was not only the first cousin of her first husband but also the brother of Sikandara Begum. Once again, she became the second wife of a married man, and her co-wife was Akhtar Asif, sister of Dilip Kumar. This marriage also did not last very long, and it was childless.

After her second divorce, Sitara married Pratap Barot, a Hindu gentleman of Gujarati heritage.[8] The couple were blessed with a son, Ranjit Barot, born in 1950.[9] 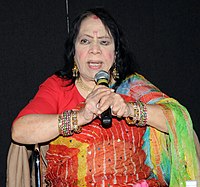 She refused to accept the Padma Bhushan award, declaring, "it is an insult, not an honor," and as a report from the Press Trust of India quoted her saying: "is this government not aware of my contribution to Kathak? I will not accept any award less than Bharat Ratna."[10]

Although her forte was kathak, she was also an accomplished dancer in many other styles of dancing including Bharatanatyam and many forms of folk dances of India. She also learned the Russian ballet, and other dances of the western world. With advancing age, her dancing activities diminished, and she was working on compiling a book encapsulating the research done by her father and her in the field of dancing, especially in kathak style of dancing. She taught kathak dancing to Bollywood celebrities such as Madhubala, Rekha, Mala Sinha, and Kajol. She envisioned formalizing her teaching, and planned to set up a Kathak training academy.

Share
Retrieved from "https://en.everybodywiki.com/index.php?title=Sitara_Devi&oldid=819932"
Categories:
Hidden categories:
This page was last edited on 19 June 2020, at 16:01.
Content is available under License CC BY-SA 3.0 unless otherwise noted.
This page has been accessed 625 times.
Privacy policy
About EverybodyWiki Bios & Wiki
Disclaimers