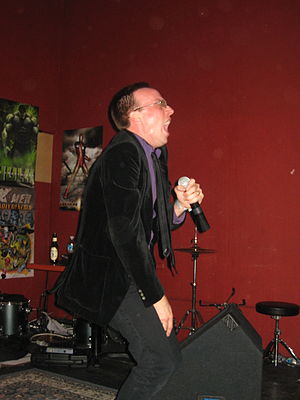 Schäffer the Darklord performing at Nerdapalooza 2008.

In 2001, Schaffer collaborated with Katastrophe and Strict Chem to form the rap group The End of the World. One of their songs, Candyass, was featured in the film Sugar High Glitter City, directed by Shar Rednour and Jackie Strano; the soundtrack was nominated for a 2002 AVN Award but lost to Snoop Dogg's Doggy Style.[3] He later branched out on his own, although he and Katastrophe have maintained both a personal and professional friendship.

In 2003, while living in San Francisco, Schaffer was a member of the bands Burmese and Bottledog.[4]

Schaffer the Darklord's songs include "Tin Man", a macabre retelling of The Wizard of Oz with the titled character as the heartless villain, "Cat People" a nerdy romp about cats, people who love cats, were-cats, and other cat related phenomena, "The Other Devil", which depicts two devils arguing on Popeye's shoulder, which is now performed live with Schaffer the Puppet starring as the Other Devil, as well as many songs featuring the Darklord's unique combination of self-deprecation and narcissism such as "A Very Bad Man", "Thunder Thief", "Scorpio", and "The Heckler". Schaffer has performed and collaborated with many of Nerdcore's biggest names such as MC Frontalot,[5] MC Lars,[6] and many others around the country.[7]

When not rapping, Schaffer hosts & performs in nerdy burlesque shows all over New York City, such as Hotsy Totsy, Kitty Nights, Original Cyn, Starshine Burlesque, Sweet & Nasty, The Pink Room, and Vaudeville Nouveau. Up until recently, Schaffer had also co-produced many shows with Nelson Lugo for Epic Win Burlesque[8][9][10] although he recently took a step back from the production end of things to focus on his rap career.

Schaffer has starred music videos for his songs "The Rappist",[11] "The Bender",[12] "Afraid of Everything",[13] and "Boys".[14] He appeared in Nerdcore Rising,[15] a documentary about the world of nerdcore hip-hop, through the eyes of MC Frontalot. He has also been photographed and interviewed by Blender Magazine.[16] Recently, he has started a podcast with longtime friend and collaborator Nelson Lugo called Epic Piecast, for Nerdyshow.com.[17]

Schaffer had performed at Nerdapalooza, the largest nerdcore hip hop event in the world, yearly from 2008 to 2013.[18] Schaffer has also performed at a benefit for the victims and families affected by the Dark Knight Rises shooting in Denver, Colorado.

Retrieved from "https://en.everybodywiki.com/index.php?title=Schäffer_the_Darklord&oldid=958066"
Categories:
Hidden categories:
This page was last edited on 16 August 2020, at 10:24.
This page has been accessed 475 times.
Content is available under License CC BY-SA 3.0 unless otherwise noted.
Privacy policy
About EverybodyWiki Bios & Wiki
Disclaimers
Mobile view