Silver & Black is an unproduced American superhero film based on the Marvel Comics characters Silver Sable and Black Cat that was to be made by Columbia Pictures in association with Marvel and distributed by Sony Pictures Releasing. It was intended to be part of Sony's Marvel Universe, adjunct to the Marvel Cinematic Universe (MCU),[N 1] but was canceled and reworked into new projects following delays concerning the screenplay. The film was being directed by Gina Prince-Bythewood, who had worked on the screenplay along with Lisa Joy, Chris Yost, and the writing team of Lindsey Beer and Geneva Robertson-Dworet.

Black Cat was first to be included in a film with the unproduced Spider-Man 4, before being introduced in The Amazing Spider-Man 2. Development on a female superhero spin-off from the Spider-Man film franchise first began in October 2014; by March 2017, it was set to feature Black Cat and Silver Sable, with Yost writing, and now considered to share the world of Spider-Man: Homecoming (which is set in the MCU). Prince-Bythewood joined in May, with filming set to take place in Atlanta, Georgia. However, Prince-Bythewood was unhappy with the film's script which led to an indefinite delay in production while she and Sony re-developed the project.

In August 2018, Sony canceled the film and replaced it with two solo films, focusing on each of the title characters. Prince-Bythewood remained as a producer on both projects.

In December 2009 the Marvel Comics character Felicia Hardy was set to be introduced in Spider-Man 4, with Anne Hathaway being looked at to play the role. Julia Stiles, Rachel McAdams, and Romola Garai were also considered. Director Sam Raimi wanted to take the character in a different direction from the comics, having her become a supervillain named "Vulturess", to partner with John Malkovich as the Vulture, rather than the cat burglar known as Black Cat.[3] The next month, Sony announced that the Spider-Man franchise would be rebooted after Raimi decided to no longer pursue direct sequels to Spider-Man 3 (2007).[4] In January 2013, Felicity Jones was in talks to join the second film in the reboot series, The Amazing Spider-Man 2 (2014), as Hardy.[5][6] She does not take on the Black Cat persona in the film.[6]

In December 2013, Sony revealed plans to use The Amazing Spider-Man 2 to establish their own expanded universe based on the Marvel properties the studio had the film rights to. Avi Arad and Matt Tolmach would produce the films as part of a franchise brain trust that also included Alex Kurtzman, Roberto Orci, Jeff Pinkner, Ed Solomon, and Drew Goddard, and The Amazing Spider-Man (2012) and The Amazing Spider-Man 2 director Marc Webb.[7] However, after The Amazing Spider-Man 2 underperformed and with Sony "under tremendous pressure to perform [that had them taking] a hard look at their most important franchise", the direction of the new shared universe was rethought. Development on a female superhero spin-off film set in the expanded universe had begun, with Lisa Joy writing the screenplay, and a 2017 release eyed. Potential characters to be featured in the film included Hardy, Silver Sable, Stunner, Firestar, and Spider-Woman.[8] By October 2014, the planned film was known by the working title Glass Ceiling, and was set to be a team-up film featuring more than one of the female superhero characters connected to the Spider-Man comics.[9] In January 2015, Jones expressed interest in reprising her role of Hardy and exploring the Black Cat side of the character, but stated that there were no plans for her to do so.[6] The next month, Sony and Marvel Studios announced a new partnership that would see the latter produce the next Spider-Man film for Sony, and integrate the character into their Marvel Cinematic Universe.[10] Sony still planned to produce the spin-off films such as the female superhero film, but would do so without Marvel's involvement;[11][8] however, they were believed to have been canceled by November 2015.[12]

It’s so up my alley in terms of these two female characters and who they are and what they’re about. It’s the perfect way for me to dive into the Marvel universe, to focus on these two women who I really respect and can’t wait to bring to life.

Following the news that Sony had revived a Spider-Man spin-off featuring the character Venom in March 2017, the company was also believed to be "fast at work" on the female superhero spin-off as well, with Chris Yost rewriting Joy's script. Tolmach and Amy Pascal were set to produce the film, which would feature both Silver Sable and Black Cat, and would not crossover with the new film Spider-Man: Homecoming.[14] That May, Sony announced that its new shared universe would be named "Sony's Marvel Universe", beginning with Venom in October 2018.[15] The Silver Sable and Black Cat film was officially titled Silver & Black, and Gina Prince-Bythewood signed on to direct.[16] Emily Carmichael also pitched for the directing role.[17] A fan of big-budget genre films, Prince-Bythewood had been planning to take on such a film, but was already focused on a different project at the time. When she was shown the script for Silver & Black by Sony she "saw the movie in my head as I was reading it, and it’s an exciting thing as a director when you know what you want to do with it. I was able to be so specific, so it was exciting in those meetings because everything I was talking about, they loved." Filming was expected to begin in late 2017.[13] 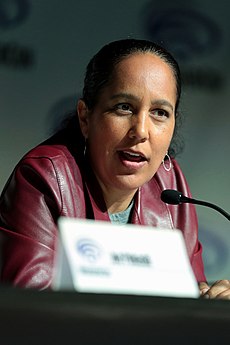 In June 2017, Pascal said that Sony now intended to have their new Marvel-based films take place in "the same world" as Spider-Man: Homecoming, describing them as "adjunct" to that world. She said that Silver & Black would have connections with Venom, and that there was potential for Tom Holland's Spider-Man to appear in both films.[2] By that point, Prince-Bythewood was writing a new draft of the script herself,[13][18] and had begun planning the visuals and music for the film, which she hoped to begin casting for shortly. Prince-Bythewood was inspired by Patty Jenkins' superhero film Wonder Woman (2017), which had been released soon after she had signed on to direct Silver & Black. Prince-Bythewood met with Jenkins several times to discuss Wonder Woman, and to get advice on directing a big-budget female superhero film.[13]

In July, Columbia Pictures president Sanford Panitch explained that Sony was not interested in producing "conventional comic-book movies" and was looking to give each film in their MU a distinct style. Silver & Black was considered a dark buddy film, compared to Thelma & Louise (1991) and Midnight Run (1988). Prince-Bythewood wanted to explore "the story of two damaged women who are at war with each other but need each other to survive", and noted that both characters are haunted by the deaths of their parents in the comics.[19] The film was officially set for release on February 8, 2019,[20] with the villains Chameleon, Tombstone, and Tarantula being considered.[21] In December, Ruth E. Carter joined as costume designer after doing so for Marvel's Black Panther (2018),[22] and Kristi Zea signed on as production designer in January 2018.[23]

Filming was now expected to begin on March 5, 2018, and run through mid-June,[23] primarily taking place in Atlanta, Georgia under the working title Tri-Border.[23] Additional filming was set to take place in Mexico, which was believed to depict the Triple Frontier area bordering Brazil, Argentina, and Paraguay.[24] Lindsey Beer and Geneva Robertson-Dworet had written a new draft of the screenplay by mid-February 2018, which they had handed back to Prince-Bythewood to polish.[18][25]

Plans to begin filming were delayed indefinitely by the end of February because Prince-Bythewood was not yet happy with the script.[26] Additional pre-production work, such as costume design, was also delayed until re-writes were completed, with Carter saying, "I’m waiting to get the signal that I’m going back to work. I love this new [superhero] genre".[27]

Prince-Bythewood said in May that she was "really looking to do something different within the genre. I just [want to] elevate [these two characters] and put them out in the world." She added that though both characters are portrayed as white in the comics, she intended to "play with the casting a little bit" by casting a black actress in one of the lead roles, wanting to "get a good black female up on screen in that genre".[28] By the end of the month, Prince-Bythewood was still working on the script, explaining that "it all starts with the script. You gotta have a great script so we want to make sure that's right before we jump in."[29] Shortly after, at the start of June, Sony removed the film from its February 2019 release date and began actively looking for a new date to release the film which could accommodate the new re-writes and delayed production start.[30]

Noting her role as director of the pilot episode for Marvel's Cloak & Dagger series, Prince-Bythewood said that she was excited to have entered the Marvel world and learned by doing "such cool, innovative things" with Marvel Television which she could then apply to the "bigger sandbox" of the films. On this increase in budget, she said "if you’re gonna spend that much money, let’s make sure that we’re telling a good story" which is why she decided to delay filming until the she was happy with the script. The director added that there was potential for her to begin production on a different project before filming for Silver & Black begins if the script is still not ready;[31] a month later, she signed on to direct an adaptation of the comic book The Old Guard first, planning to begin filming on that project by the end of 2018.[32]

In August, Sony officially canceled Silver & Black, with the intention to instead rework the project as two separate solo films focusing on each of the title characters. An official decision had not been made at the time, but Prince-Bythewood was not expected to direct either of the new films.[33] A month later, Tolmach was asked about the progress of the Silver & Black project and did not acknowledge this decision by Sony, simply saying that they were "still working on the script".[34]

The first of the new solo films to be reworked from Silver & Black is expected to be a film focused on Black Cat, with one featuring Silver Sable set to follow that. If Prince-Bythewood did not return as director for the new projects, she would remain involved as a producer. Sony was adamant at the time of the new films' announcement that Prince-Bythewood would be replaced with other female directors.[33]

Retrieved from "https://en.everybodywiki.com/index.php?title=Silver_%26_Black_(film)&oldid=288803"
Categories:
Hidden categories:
This page was last edited on 11 January 2019, at 05:38.
This page has been accessed 186 times.
Content is available under License CC BY-SA 3.0 unless otherwise noted.
Privacy policy
About EverybodyWiki Bios & Wiki
Disclaimers
Mobile view