Smita Thackeray is a Social activist and Film producer. She is the chairperson and founder of Rahul Productions and Mukkti Foundation. she has worked in the field of Women's Safety , HIV/AIDS awareness and Education. She ventured into Motion pictures with Haseena Maan Jaayegi which was released in June 1999, grossing 27 crores worldwide, after which she has gone on to work in Hindi and Marathi Film and Television Industry.

Smita Thackeray was born on 17th August [2] to a Middle-class Maharashtrian family in Mumbai. Her parents are Madhukar Chitre and Kunda Chitre. She attended Chhabildas Girl's High School, Dadar. As a child she was trained in Marathi Classical singing. She completed her Bachelor’s in Science (BSc), with Honors from Ruparel College, Mumbai, with Botany as a major.

She started out at the Centuar Hotel on a small stipend, where she handled administrative and managerial tasks [3] Her interest in Fashion translated to NARI boutique. She went on to be the Founder and Chairperson of Mukkti Foundation in 1997. She is the owner of Rahul Productions. She was formerly the President of the Indian Motion Picture Producers Association[4] from 2002-2004 [5][6]. During her time in IMPPA, she started a conversation around ethical screening of Films and Content on television and other media post release.[7] She is also the Founder/ Ex-Managing Director of Magic Cloud. 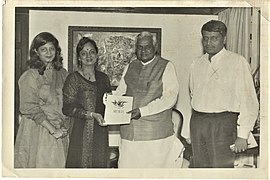 Smita Thackeray's aim in setting up Mukkti foundation was to raise awareness about HIV and AIDS [8] and to eradicate the menace of Drug Abuse among the youth. Between July 1999 to May 2000 Mukkti raised funds for various causes through Celebrity cricket and football matches, Rs 5 lakhs was contributed for the Gujarat cyclone relief fund (1998), Rs 50 Lakhs was contributed for bereaved indian soldiers of kargil war, Rs 41 Lakhs was contributed for the drought victims of Rajasthan and Gujrat. [9][10] Between 1998 and 2008, Mukkti Foundation hosted its Annual AIDS Show to mark “World AIDS Day”, where Film Stars and other celebrities joined hands to spread the message of AIDS Awareness. 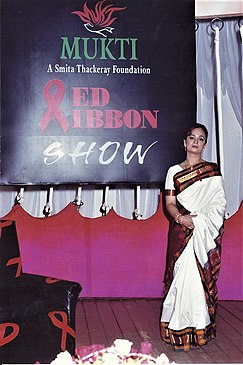 Smita Thackeray on the Set of the Red Ribbon Show

In November 2000, a 13 episode Television chat show hosted by Sonu Nigam on HIV/AIDS was aired, it was aimed at overthrowing the social stigmas around HIV/AIDS by facilitating interactions between individuals affected by HIV. In 2003, three public service announcements[11] were produced staring star celebrities, Amitabh Bachchan, Waheeda Rehman and Akshay Kumar, to educate people about the misconceptions around AIDS. One lakh pledges were collected to support the cause of an AIDS free life in 2009 under the campaign "I Pledge" with John Abraham as ambassador.[12] In 2014, Me Mukti Marshals, trained individuals to support Police and RPF were deployed in Mumbai trains at night to protect women in Mumbai travelling in local trains.[13]

The Foundation was recognised for its work by WHO in December 2002 in their newsletter - Window on SEAR, (The Newsletter of the South-East Asian office) which stated - "In a few years, Mukti, has earned a reputation for doing genuine work for society and has earned much respect"

On 1st December 2018, Smita Thackeray, along with stars Sunny Leone, Nisha Harale, Rohit Verma headed a 'Freedom Parade' in solidarity with the LGBTQ community who suffer the most stigma around HIV/AIDS, it was a move to spread awareness among all communities.[14]

Smita Thackeray in 2001 was elected as the first female president of IMPPA.[15] Video piracy was a major issue that was killing revenue of all the producers, she facilitated an MOU between Film Producers and Cable Tv associations in December 2001 saving the filmmakers Rs 1 crore daily an amount lost to producers due to illegal telecasting [16][17] For the first time in the history of IMPPA a star studded fundraiser was hosted by the association called Ehsaas 2002 to raise funds for medical and education centres for spot boys and light men[18]. In 2004, Indian Producers were invited to Switzerland by The Swiss Consulate to Promote Film Making, as a sign of welcome for the Indian Cinema by the Swiss President, Mr Joseph Deiss. [19] [20]

Smita Thackeray is the daughter of Madhukar Chitre and Kunda Chitre. She has two sisters Swati and Sushma. She grew up in a middle class family in suburban Mumbai. She married Jaidev Thackeray, son of Bal Thackeray in 1986 and they got divorced in 2004[24], she continued to stay in her In-laws home 'Matoshree'. She has two sons Rahul Thackeray her eldest and Aaishvary Thackeray her youngest. Rahul and Aishvary, graduated from American School of Bombay. Rahul went on graduate from Toronto Film School and is currently a Marathi and Hindi film writer/director [25] [26] and filmmaker.