Soyombo Revival Society (in Russian Общество Возрождения Соёмбо, abbreviated ОВС, OVS) was a secret society founded by white émigrés in Mongolia (according to a few sources[1][2], it denoted both Mongolia and Chinese ethnic Mongol provinces). In 1930, it became a subsidiary organization of Mongolian department of the Russian All-Military Union (ROVS). Its main purpose was to gain the support of the local Asiatic population in various anti-communist activities. 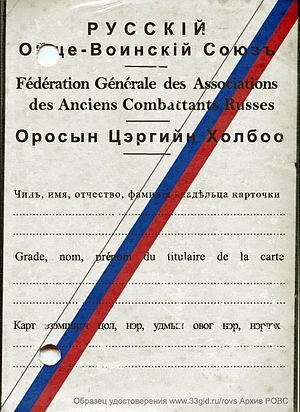 The ROVS was established Kingdom of Serbs, Croats and Slovenes in 1924, and its Far-Eastern Department was founded in 1927[1] from which the Mongolian Department was separated from in 1929.[2][3] Surrounded by pro-Soviet forces, senior officials of the Mongolian Department (mostly former staff of Semyonov and Ungern[4]) decided to form separate a conspiracy organization to attract more supporters from local population.[4][5] Its structure and customs were largely inspired by traditional Mongolian Duguilang societies and Ungern's idea of the "Order of Militant Buddhists"[6] in contrast with paramilitary organization of regular ROVS departments. Despite initial success, the Society had proven to be unable to survive after the beginning of the mass purges in Mongolia and was forced to retreat to China.[5]

In Xinjiang, the OVS managed to gain support from exiled Semirechye Cossacks[7] and later participated in the Kumul Rebellion and coup against Jin Shuren.[8][9]

The OVS possibly provided volunteer forces in the Suiyuan.[8]

The Society was eventually dissolved after arrests of most of its members following the Soviet invasion of Manchuria and Chinese Civil War.[5][4]

Retrieved from "https://en.everybodywiki.com/index.php?title=Soyombo_Revival_Society&oldid=962874"
Categories:
Hidden categories:
This page was last edited on 17 August 2020, at 13:20.
This page has been accessed 132 times.
Content is available under License CC BY-SA 3.0 unless otherwise noted.
Privacy policy
About EverybodyWiki Bios & Wiki
Disclaimers
Mobile view