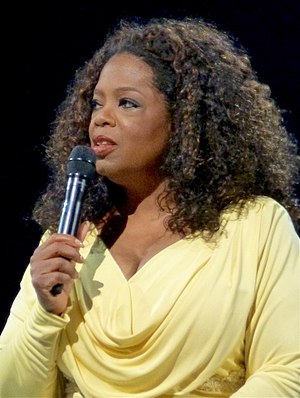 A television presenter is a person who introduces or hosts television programs (or segments thereof such as an infomercial advertiser). Nowadays, it is common for personalities in other fields to take on this role, but some people have made their name solely within the field of presenting, particularly within children's television series, to become television personalities.[1][2]

Some presenters may double as an actor, model, singer, comedian, etc. Others may be subject matter experts, such as scientists or politicians, serving as presenters for a programme about their field of expertise (for instance, David Attenborough). Some are celebrities who have made their name in one area, then leverage their fame to get involved in other areas.

Examples of this latter group include British comedian Michael Palin who now presents programmes about travel (such as Around the World in 80 Days), and American actor Alan Alda, who presented Scientific American Frontiers for over a decade.[3] Another example would be American stand-up comedian Joe Rogan, who is a commentator and post-fight interviewer in UFC. The term is commonly used in other countries including Ireland, Australia, and Sri Lanka.

In the US, such a person is typically called a host, such as in the terminology talk show host, or an MC (Master of ceremonies). In the context of TV news programs, they are known as anchors.

Retrieved from "https://en.everybodywiki.com/index.php?title=Television_presenter&oldid=740847"
Categories:
Hidden categories:
This page was last edited on 25 May 2020, at 14:46.
Content is available under License CC BY-SA 3.0 unless otherwise noted.
This page has been accessed 1,057 times.
Privacy policy
About EverybodyWiki Bios & Wiki
Disclaimers