The family of Mahatma Gandhi

From EverybodyWiki Bios & Wiki
Jump to:navigation, search
Not to be confused with Nehru–Gandhi family.

The Gandhi family is the family of Mohandas Gandhi (2 October 1869 – 30 January 1948). Gandhi was the distinguished leader of the Indian independence movement in British-ruled India. Mahatma : is also called the Father of the Nation or "Bapu" as the prime minister called him at his funeral; a title given to him by Subhas Chandra Bose on 6 July 1944 during his address on the Singapore Radio. On 28 April 1947, Sarojini Naidu too referred Gandhi with the title Father of the Nation.[1] Gandhi is also referred to as Bapu (Gujarati: endearment for "father", in India. In common parlance in India he is often called Gandhi ji. An anonymous journalist from Jetpur town in Saurashtra he has also been referd to (mostly by British officials) as Gae-ndy or Ga-ndhi as in the a makes an "ah" sound, in an anonymous letter referred Mohandas Karamchand Gandhi as Mahatma (Sanskrit: "high-souled", "venerable"),[2] for the first time while he was still in South Africa.[3] Gandhi's family consists of him, his wife and his five sons(He had another son who died within the few days after birth). 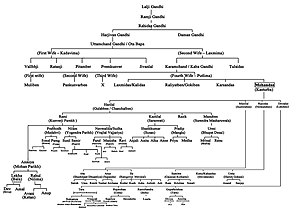 Retrieved from "https://en.everybodywiki.com/index.php?title=The_family_of_Mahatma_Gandhi&oldid=971742"
Categories:
Hidden categories:
This page was last edited on 19 August 2020, at 22:14.
This page has been accessed 464 times.
Content is available under License CC BY-SA 3.0 unless otherwise noted.
Privacy policy
About EverybodyWiki Bios & Wiki
Disclaimers