Tilo Rivas is an American politician, research scientist and former journalist. He serves as Commissioner of Public Works in Union City, New Jersey under Mayor Brian P. Stack, and represents on the Hudson County, New Jersey Board of Chosen Freeholders, one of nine members who serve in a legislative role administering all county business.[1]

Tilo Rivas was born in the Dominican Republic to Maria and Inocencio. He has two sisters, Angela and Dilia, and three brothers, Celso, Antonio and Hernan. Rivas was educated at the Autonomous University of Santo Domingo, where he studied communications. He immigrated to Hoboken, New Jersey in 1970, and moved to Union City in 1992.[1][2] 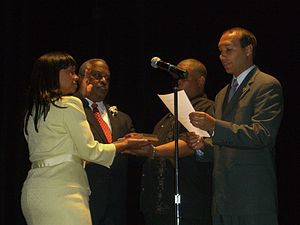 Rivas is a technician for Kraft Foods Global Biscuit Group in East Hanover, New Jersey, and Maxwell House.[2] He has also worked as a television and print journalist in both the United States and his native Dominican Republic.

On the Freeholder Board he serves as chairman of the Education Committee, Representative on the Workforce Investment Board, and as a member on the following committees: County Government, Oversight and Policy Review; Economic Development and Housing; Ethics; Senior Citizens and Veterans Affairs; Task Force on the Homeless; and Tourism and Cultural Affairs.[citation needed]

Rivas is married to his second wife, Marianela; he has two sons from his first marriage, Kenneth and Daniel.[2]

Share
Retrieved from "https://en.everybodywiki.com/index.php?title=Tilo_Rivas&oldid=972998"
Categories:
Hidden categories:
This page was last edited on 20 August 2020, at 06:52.
Content is available under License CC BY-SA 3.0 unless otherwise noted.
This page has been accessed 1,232 times.
Privacy policy
About EverybodyWiki Bios & Wiki
Disclaimers