Transformation of culture, or cultural change, is the dynamic process whereby the living cultures of the world change and adapt to external or internal forces. This process is occurring in all cultures of the world. Forces which contribute to cultural change include colonization; globalization; advances in communication, transport and infrastructure improvements; and military expansion. 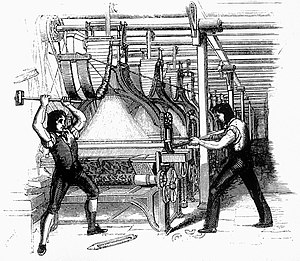 "Western" or European culture began to undergo rapid change starting with the arrival of Christopher Columbus in the New World, and continuing with the Industrial Revolution. The Modern Period, from 1914–1945, is characterized as a highly transformative era, with World War I serving as the watershed moment initiating and forever marking the Modern period.[2] In literature, the work of the High Modernists ruled this period. Notable High Modernists include T.S. Eliot, Ernest Hemingway, Gertrude Stein, Ezra Pound, and James Joyce. The High Modernists were predominantly American expatriates living abroad after the war and strongly marked by the war experience. A great deal of literature was written attempting to convey the World War I experience.

The 1960s were a tumultuous time in Western culture, especially in Europe due to the severe restructuring necessary following the Post–World War II economic expansion and in the United States due to its controversial participation in both the Cold War and South East Asian political affairs with the Vietnam War, where the American role was perceived from a number of directions as prolonging the residual effects of decades of colonial patronizing in the Asian region by economically well-to-do European powers. This period was marked by a number of nascent social changes including a heightened sensitivity to the futility of war which sparked hundreds of protest marches and popular uprisings on a worldwide scale, rising tides of awareness concerning the need to change overwhelmingly negative race-relations in the United States, experimental drug use, the growth of television, a new genre in popular music, and a general shift away from the social normative of previous generations. Out of this era stemmed some of today's most powerful forces, such as the Internet. The Internet was created in large part by people cooperating, taking chances, and experimenting outside of corporate settings. Many of the individuals who were drawn to the technology in its infancy were activists and progressives.[3] Some scholars and social theorists recognize that we are undergoing another cultural change brought about by the New Industrial Revolution. This Revolution is changing the way that products are made and disposed of,[4] how buildings are constructed, and our relationship to the natural world and its capital.[5] See also: segregation laws, conscientious objection, May 1968.

Wi-jún-jon before and after his trip to Washington, DC, by George Catlin

Indigenous economic systems tend to be more collectivist than capitalism and some members of various indigenous peoples are upset by the dominance of capitalism. This phenomenon is not new, but processes of globalization have increased the scale and frequency of such conflicts of perspective. The contradictions between indigenous and capitalist mode of production, and the tensions generated by their intersection, have deep historical roots in the process of colonization.[6]

In many cases, the two worldviews are antithetical. Victoria Tauli-Corpuz, an Igorot activist from the Philippines, summarizes the difference when she writes that "industrialized culture regards our values as unscientific obstacles to modernization and thus worthy of ridicule, suppression, and denigration. The industrial world also views our political, social, and land-tenure traditions as dangerous: our collective identities; our communal ownership of forests, waters, and lands; our usufruct system of community sharing, and our consensus decision-making are all antithetical to the capitalist hallmarks of individualism and private property." [7]

Many indigenous peoples view resources in a different way from the global industry's commodity-centered viewpoint. Arthur Manuel of the Indigenous Network on Economies and Trade wrote that "mainstream economists tend to value development strategies solely in terms of their wealth generation potential for industry and governments. So resources are viewed in strictly monetary terms. But indigenous peoples consider the value of land and resources in far broader, more integrated terms, including cultural, social, spiritual and environmental values, and their sustainability. Among indigenous peoples, decisions about caring for resources and the environment are usually made as part of a collective process, where the community takes into account a full spectrum of values and benefits other than short-term economic gains."[8]

Around the world many indigenous groups have over centuries or millennia successfully sustained economies in one particular place and ecosystem. The co-adaptation of people with other elements of their ecological systems has meant that the integrity and functioning of these systems has been sustained even as the communities' culture developed and changed historically. These economic arrangements are viewed as one component of a cultural understandings that include sacred interactions with the world.[9]

Indigenous economies are seen as sustainable to the extent to which the holders of culture interact in a culturally appropriate way with the world around them. In many areas indigenous people have sustained communities for centuries, and the ecological systems of which they are a component have maintained relative richness and resilience to natural perturbations such as drought or fires. The ecosystems that have been remained predominantly under control and care of indigenous peoples thus tend to be characterized by high biodiversity, abundant renewable resources, and relatively unexploited nonrenewable resources. Many indigenous groups view the advent of globalization as a threat to the sustainability of their economies, and believe that it exploits their land and knowledge.

Environmental stresses and impacts on cultures[edit]

Cultures around the world are undergoing change due to environmental stresses, such as climate change.[citation needed]

Advances in medical technology have contributed to demographic changes, including increased longevity and decreasing fertility.

Certain technological innovations such as computers, the Internet, and miscellaneous sound and visual recording media have been welcomed and embraced by indigenous peoples.

Share
Retrieved from "https://en.everybodywiki.com/index.php?title=Transformation_of_culture&oldid=659482"
Categories:
Hidden categories:
This page was last edited on 17 November 2017, at 04:08.
Content is available under License CC BY-SA 3.0 unless otherwise noted.
This page has been accessed 451 times.
Privacy policy
About EverybodyWiki Bios & Wiki
Disclaimers