TrumpiLeaks is a whistleblower website started by American documentary filmmaker and author Michael Moore in June 2016 to solicit leaks of material about Donald Trump from within the Trump Administration, the Trump Organization, and U.S. citizenry.[1][2][3] Moore was inspired to create the site after witnessing the firing by Trump of three federal law enforcement officials: U.S. Attorney Preet Bharara, former Acting Attorney General Sally Yates, and former FBI Director James Comey.[4][5]

Moore announced the site via an editorial in The Huffington Post.[2][6] Users could submit data to Moore via postal mail, email encryption, Peerio, WhatsApp, and Signal software.[1][7] Salon expressed its view about the website: "Moore has launched what will perhaps be his most important project yet".[5] USA Today commented of Moore's announcement, "The letter had the tenor of a rallying cry."[8] 'Engadget was skeptical, pointing out it was redundant to other sites using SecureDrop.[3] WikiLeaks gave a statement criticizing the site, and saying theirs was more secure.[9] The website's launch received additional coverage across multiple language publications, including Spanish,[10] Italian,[11] German,[12] and Portuguese.[13] 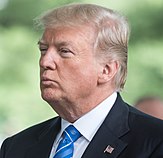 Filmmaker and author Michael Moore was involved in 2017 creating a documentary film titled Fahrenheit 11/9, analyzing events leading up to the election of Donald Trump as President of the United States.[14][4][15] The same year he was scheduled to star in a Broadway theatre one-person show motivated by Donald Trump's ascension to the White House, titled, The Terms of My Surrender.[8]

The website's purpose was to encourage leaks related to Donald Trump, in the form of photographs, video recordings, sound files, or documents.[8] Moore posted a message to his personal website, explaining the motivation of the new venture and that he wanted any information related to: "crimes, breaches of public trust and misconduct committed by Donald J. Trump and his associates".[8] He asserted, "Trump thinks he's above the law".[8] Moore stated it was his view that Trump had engaged in obstruction of justice, falsehoods to the United States citizenry, promoted violent behavior, and violated the Constitution of the United States.[17][14]

Moore established a four-point-plan to lead to Trump's political downfall: "1. Mass Citizen Action 2. Take Him To Court Nonstop 3. YOU Run for Office 4. An Army of Satire."[7][18] He appealed to readers to follow the example of past whistleblowers, including Edward Snowden, Chelsea Manning, Daniel Ellsberg, Jeffrey Wigand, Sherron Watkins, and Karen Silkwood.[19] Moore placed the act of whistleblowing as an American tradition within the context of the history of the United States, dating back to the foundation of the country.[4][17][15] In order to justify publication of such materials, Moore included a quotation from Vice President of the United States Mike Pence about freedom of the press.[6][16] Moore acknowledged that submitting information to him in this covert manner, "might get dangerous. It may get us in trouble. But we're running out of time. We must act. It's our patriotic duty."[8][17][20]

TrumpiLeaks was launched on June 6, 2017.[8][17][20] It was founded by filmmaker Michael Moore, as a devoted portal section off his own website at michaelmoore.com.[4][3][5] Moore announced the formation of the website, in an editorial letter published by The Huffington Post.[20][2][6]

The site was geared to accept materials from businesses including the Trump Organization, police, or the federal bureaucracy.[20][21][19] Moore said he had brought together a group familiar with information security in order to protect the ability of leakers to remain anonymous, and stated the site had "high-powered encryption technology".[20][18] The website offered individuals the ability to submit data to Moore via postal mail, email encryption, Peerio, WhatsApp, and Signal software.[1][7][14]

Michael Rozsa assessed the significance of the initiative, in a report for Salon, writing: "Moore has launched what will perhaps be his most important project yet".[5] USA Today reporter Sean Rossman commented of Michael Moore's message explaining his new website, "The letter had the tenor of a rallying cry."[8] Angelica LaVito of CNBC compared and contrasted Moore and Trump, pointing out "Moore has long been a vocal opponent of Trump."[17] LaVito referenced Trump's statements on leaks, noting: "President Donald Trump wants to stop leaks. Michael Moore wants to create more."[17] The News Tribune journalist Craig Sailor wrote: "Two of pop culture's biggest icons are about to butt heads. One of them is the president."[18] Similarly, Jacqueline Thomsen writing for The Hill acknowledged, "The documentary filmmaker has been an outspoken critic of President Trump".[14] Engadget reporter Mallory Locklear was skeptical of the site, pointing out: "The concept and website are both a little redundant", and noting other news organizations had SecureDrop for similar purposes.[3] SC Magazine also noted the Trump Administration was already facing a stream of leaks.[2] The A.V. Club commented of Moore's multiple actions against Trump including the website: "The presidency of Donald Trump seems to have newly energized the man".[22]

WikiLeaks was critical of Moore's actions, and stated its website was more secure than TrumpiLeaks.[9] The Washington Examiner noted the timing of the website's start, coming on the heels of federal law enforcement action against a whistleblower: "The launch of TrumpiLeaks comes just one day after the Department of Justice announced the arrest of 25-year-old federal contractor Reality Winner, for leaking classified information related to Russia to an online news outlet."[7] Douglas Perry wrote for The Oregonian that Moore emphasized, "Trump critics shouldn't grow complacent because of the scandal-a-day nature of the Trump administration and assume he'll soon be run out of office."[21] The website's launch featured media coverage in multiple other language publications, including Spanish,[10][23][24] Italian,[11][25] German,[12] and Portuguese.[13]

Other articles of the topics Intelligence AND United States : Donald Trump revelation of classified information to Russia

Other articles of the topic Intelligence : Donald Trump revelation of classified information to Russia

Other articles of the topic United States : American Innovation $1 Coin Program Design - Obverse, Technodrome, Shockwave (Transformers), List of companies of the United States, Death and state funeral of George H. W. Bush, Logan Paul, 31st Kentucky Infantry Regiment
Some use of "" in your query was not closed by a matching "".

Share
Retrieved from "https://en.everybodywiki.com/index.php?title=TrumpiLeaks&oldid=975442"
Categories:
Hidden categories:
This page was last edited on 20 August 2020, at 22:48.
Content is available under License CC BY-SA 3.0 unless otherwise noted.
This page has been accessed 4,084 times.
Privacy policy
About EverybodyWiki Bios & Wiki
Disclaimers