Phil Hill better known as UFO Phil, is a performer, public speaker, "cult legend"[1] and "Don Quixote of the E.T. set"[2] described by Mike Myers as a "high-pitched Dr. Evil." Hill has made a name for himself through appearances on national radio programs, television, films, and internet videos speaking on the subject of extraterrestrials and the paranormal. Whether Phil Hill is an actual believer in the paranormal or is engaging in a kind of performance art is the subject of some debate. Although he is sometimes described as a comedic performer, Hill has stated publicly that he knows "nothing of comedy". In this regard, UFO Phil may be an example of Poe's law and has been compared to Andy Kaufman's persona Tony Clifton.[3] UFO Phil released his second studio album entitled "Remembering the Future" on November 7, 2017.[4] On May 18, 2018 UFO Phil announced on the radio show Coast to Coast AM with George Noory that he would appear on prime time network television in the summer of 2018.[5] On August 2, 2018 UFO Phil appeared on ABC's The Gong Show with host Mike Myers.[6][7] 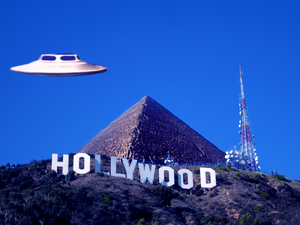 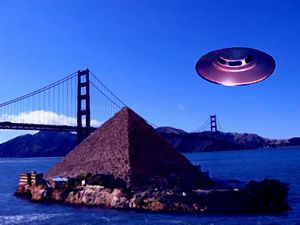 Phil is supposedly a native of Roswell, New Mexico[8] currently residing in Hollywood.[9] According to Phil, he was first abducted in 1972 by aliens who implanted him with a microchip, granting him a "heightened musical talent".[10] Subsequently, Phil writes and performs novelty songs about extraterrestrials and science fiction.[11]

In 2010, Phil claimed to be working on a way to "harness free electricity from the air" and distribute it to the people of the world.[12] This was possible, according to Phil, because of a reactor blueprint given to him by the "Good Aliens". Phil said he planned to construct his power plant at his new home on top of Pikes Peak.[13] In January, 2011, Phil announced plans to construct a full-sized limestone pyramid, modelled after the Great Pyramid of Giza, at Alcatraz Island,[14] as well as other pyramids atop Pikes Peak in Colorado and behind the Hollywood Sign.[15]

During the planning stages for what he dubbed the "Pikes Peak Pyramid Proposal", Phil attempted to recruit 60 volunteers to haul 2.3 million limestone blocks weighing about 6 million tons and 8,000 tons of granite to the top of the mountain. In February 2011, the Metro Crypto Science Society at Metropolitan State University of Denver spoke out publicly against Phil's Pikes Peak pyramid construction plans, stating: "It’s a mountain and shouldn’t be tampered with."[16] The mayor of Colorado Springs, United States Forest Service, and officials at NORAD similarly expressed disinterest in his plan.[17][18][19] Phil maintained that he didn't actually need government permission to build his pyramids "since I’m not building for profit or assembling more than 75 people".[20]

Denver, Colorado mayoral candidate and UFO disclosure activist Jeff Peckman said Hill's pyramid idea should not be discounted and he "would be willing to talk to him about it at some point". In March, 2011, Peckman was referring to UFO Phil's Pikes Peak Pyramid Proposal when he told the Denver Post “It’s always useful for people to look at all of these things in an unbounded way", adding, "Denver could be a good candidate for a space port".[21][22]

In 2011, Phil announced plans for a "Concert for the Aliens" at the Monterey County Fairgrounds in Monterey, California to welcome the arrival of extraterrestrials, explaining that blue aliens from the Planet Zaxon would arrive on Earth to correspond with the end of the Mayan Calendar.[24]

In 2012, Phil claimed aliens from Planet Zaxon were appointing him "President of Earth."[25] Hill said, once he was appointed President, “The Statue of Liberty has to come down". He planned to replace the monument with a statue of an alien leader named Zaxon who "has very nice skin and will look phenomenal as a statue".[26]

In 2014, Hill claimed to be a victim of identity theft and fraudulent impersonations. To combat identity theft, he said he was working with the United States government on a plan to implant identifying microchips into the brains of every person on Earth.[27]

UFO Phil also says he's working on a prime time network television show where he will seek to confirm or debunk abductions using science, common sense and electro-magnetic tools from his basement. The "real purpose" of the show, according to Hill, is to give a voice to the extraterrestrials when they arrive on Earth, and to aid them in disseminating their propaganda.[28]

In 2018, Hill announced on a broadcast of Coast to Coast that he was going to be on network television, but was unable to provide any further details due to a non-disclosure agreement. In July 2018 Hill elaborated on this announcement, posting to his Instagram account that he was going to appear on an ABC program on August 2nd, but did not specify which program. He later revealed on Coast to Coast AM that his appearance would be on The Gong Show. [29]

"Listening to Coast to Coast" performed by UFO Phil

UFO Phil's music has been played on the Dr. Demento Show.[30] He has made a studio appearance on Coast to Coast AM to perform one of his songs[31] and created the program's Friday end theme, "Listening to Coast to Coast."[10] In August 2018 he performed an alien-inspired rap song, complete with backup dancers, on season two of The Gong Show[32]. Phil has also appeared with Tom Green.[33]

In 2018 UFO Phil publicly announced that a Hollywood production company was developing a feature film based on his life and work.

This article "UFO Phil" is from Wikipedia. The list of its authors can be seen in its historical and/or the page Edithistory:UFO Phil. Articles copied from Draft Namespace on Wikipedia could be seen on the Draft Namespace of Wikipedia and not main one.

Share
Retrieved from "https://en.everybodywiki.com/index.php?title=UFO_Phil&oldid=780419"
Categories:
Hidden categories:
This page was last edited on 8 June 2020, at 08:59.
Content is available under License CC BY-SA 3.0 unless otherwise noted.
This page has been accessed 2,723 times.
Privacy policy
About EverybodyWiki Bios & Wiki
Disclaimers